One Tata Indigo car while moving on Shamshabad road in Telangana was gutted by fire today. 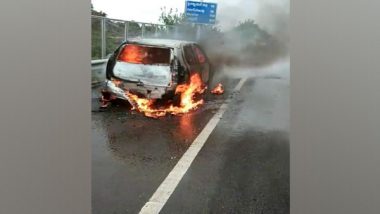 Moving car gutted by fire in Telangana on Thursday. (Photo/ANI)

Speaking to ANI, Sub-Inspector Krishna, narrated that an old model Tata Indigo car caught fire due to some internal glitches. On witnessing the fire, the car driver was, however, rescued by some lorry drivers.

"The driver has been immediately admitted to DRDO Apollo Hospital after he had some severe burns on him during the accident," he added.

He further said that the case has been registered as a fire accident and an investigation is being underway including the identification of the driver. (ANI)