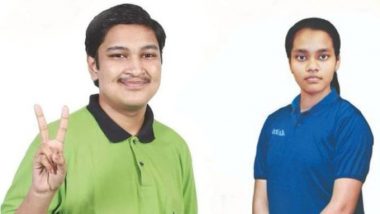 New Delhi, October 16: Delhi's Akansha Singh scored 720 out of 720 marks in medical entrance exam NEET, but lost the top rank to Odisha's Soyeb Aftab due to her younger age which is one of the factors accounted in the National Testing Agency's tie-breaking policy. According to officials, the tie-breaking policy takes into account factors such as age, subject-wise marks and number of incorrect answers.

"Soyeb Aftab of Odisha and Akansha Singh of Delhi have both scored perfect 720 score in the NEET examination. However, as Aftab is older, he has been ranked at the top in the national ranking," an official said. NEET Merit List 2020: Soyeb Aftab Bags All India 1st Rank, Gets 100% Score With Perfect 720 Marks.

From this year, the admissions to MBBS course in 13 All India Institute of Medical Sciences, Jawaharlal Institute of Postgraduate Medical Education and Research, Puducherry, will also be made through NEET following the amendment in National Medical Commission Act, 2019, passed by Parliament last year.

The test was offered in 11 languages -- English, Hindi, Assamese, Bengali, Gujarati, Kannada, Marathi, Odia, Tamil, Telugu and Urdu -- this year. Based on the initial report, more than 77 per cent aspirants took the test in English, around 12 per cent in Hindi and 11 per cent in other languages. Did Muslim Students Shoaib Aftab, Yasir Hameed, Sana Mir and Others Secure Top 5 Ranks in NEET 2020 Merit List? Check Truth Behind Fake Tweet Going Viral.

The exam was earlier postponed twice due to the COVID-19 pandemic and the government decided to go ahead with it, despite opposition by a section, to mitigate any further academic loss.