"At that time total power supply to Bihar was a meagre 700 MW which now has reached more than 6000 MW daily. We have taken power to every house, now we will provide solar light in every village," he said. 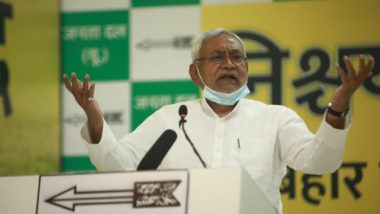 Ziradei, October 20: Bihar Chief Minister Nitish Kumar Tuesday mocked Tejashwi Yadav's promise of approving 10 lakh jobs if his party came to power, and asked will money for the purpose come from the jail or will it be done through fake notes.

He highlighted dismal track record of the RJD's past government and appealed to the people not to get "misled" by their "pralobhan" (temptation). "These days many people are saying they will give this many jobs. But from where will they bring the money for the purpose? Will they bring it from the jail or will they do it through fake notes, Kumar wryly said, taking an oblique dig at RJD chief Lalu Prasad lodged in jail in Ranchi after conviction in fodder scam cases. Also Read | PM Narendra Modi’s Address to The Nation Highlights: From Urging Citizens to Take All Precautions Against COVID-19 Amid Festive Season to Speaking on Vaccine, Here’s What The Prime Minister Said.

Addressing election rallies at Gopalganjs Bhorey and Siwans Ziradei, the JD(U) chief asked, "If they can give 10 lakh jobs, will they leave the rest out?

Tejashwi had recently announced that if his party-led Grand Alliance was voted to power, 10 lakh government jobs will be sanctioned in the very first cabinet meeting. Also Read | How to Download Instagram Stories, Videos & Photos on Your Smartphone.

"Dont get misled by this promise of jobs. We have worked hard to bring the state on the path of development. If you give us another opportunity we will work more," he said. The chief minister again asked as to how many jobs the RJD provided during its rule during 1990-2005.

"Our government gave more than six lakh jobs in the last five years and process is on for recruitment on 60-70 thousand more jobs," he said.

"There was no road, no power...it was jungle raj, he said taking a swipe at the RJD's rule in the state in the past. He alleged the Dalits were used by his rivals, but his government ensured respect to all.

Talking about, his governments work in the health sector, he said earlier just 39 people used to visit primary health care centres per month but now these PHCs are witnessing 10,000 footfalls in a month. "Some people dont want to see our development works, they are just indulging in nepotism. I have no selfish agenda. I am dedicated to the service of people, he said.

The states crime rate has also improved and now its ranked 23rd in the country as per the National Crime Record Bureau (NCRB) latest report, he said while addressing a public meeting in Bhorey in favour of JD(U) candidate Sunil Kumar.

Sunil Kumar, who recently retired as Director General of Home Guards took membership of the JD(U) and has jumped into poll fray from Bhorey reserved constituency.

He said during the RJD regime, there was not power in cities, let alone villages. "At that time total power supply to Bihar was a meagre 700 MW which now has reached more than 6000 MW daily. We have taken power to every house, now we will provide solar light in every village," he said.

Kumar, who has been declared as NDA's CM face, said his future government will construct new roads and bypasses in cities and villages so that people dont have to worry about next 50 years.