The devotee can track the movement of the Prasadam by logging in to India Post website", the release added. 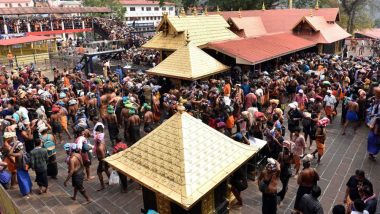 New Delhi, December 1: Department of Posts has decided to deliver Sabarimala 'Swami Prasadam' to devotees across the country at their doorstep.

According to the official press release on Tuesday, "Keeping in view devotees across the country, Department of Posts conceptualized and developed a comprehensive booking and delivery package for the delivery of "Swami Prasadam" of Sabrimala Temple at the doorstep of the devotees using the vast network of postal department covering every nook and corner of the country." Also Read | Cyclone Burevi: Heavy Rains to Lash Kerala on December 2, Red Alert Issued in Thiruvananthapuram, Kollam and Two Other Districts.

"Kerala Postal Circle entered into an agreement with Travancore Devaswom Board for this purpose creating a tailor-made product. The devotees can now book the Swami Prasadam from any post office in India by paying only Rs 450 for each packet of prasadam. The packet contains one packet of Aravana, AadiyaSishtam Ney (ghee), Vibhooti, Kumkum, Turmeric and ArchanaPrasadam. A devotee can book up to ten packets at a time." Also Read | GHMC Election 2020: With Low Voter Turnout, Hyderabad Local Body Polls Receive Lukewarm Response.

"As soon as Prasadam is booked under Speed Post, a message with the Speed Post number will be generated and intimated to the devotee via SMS. The devotee can track the movement of the Prasadam by logging in to India Post website", the release added. Also Read | GHMC Election 2020: With Low Voter Turnout, Hyderabad Local Body Polls Receive Lukewarm Response.

The release mentions, "This service was launched all over India with effect from November 6. There has been a tremendous response from the public for this service. Around 9000 orders have already been booked all over India till date and the same is increasing day by day. "

"Sabarimala Temple has been opened to the devotees, for this year's "Mandalam season pilgrimage" from November 16. Due to the prevalent COVID -19 pandemic situation, the pilgrims had to follow strict protocols for visiting the shrine. Only a very limited number of devotees were allowed per day to visit the shrine this season. A substantive number of devotees were not able to fulfill the Covid-19 protocols for getting the darshan of Lord Ayyappa due to the strict restrictions imposed for pilgrimage during this season.", the release further stated.

Around seven months after it was closed in the wake of the Covid-19 pandemic, the doors of Sabarimala temple were thrown open for devotees from October 16, albeit with certain restrictions.