Get latest articles and stories on India at LatestLY. President Ram Nath Kovind on Friday expressed condolences on the demise of those who lost their lives in a fire incident at a building near Mundka Metro Station in Delhi. 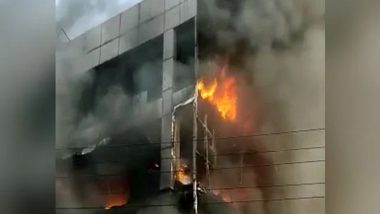 New Delhi [India], May 13 (ANI): President Ram Nath Kovind on Friday expressed condolences on the demise of those who lost their lives in a fire incident at a building near Mundka Metro Station in Delhi.

"Distressed by the tragic fire accident at a building near Mundka Metro Station in Delhi. My condolences to the bereaved families. I wish for the speedy recovery of the injured," tweeted the Rashtrapati Bhavan today.

Delhi Chief Minister Arvind Kejriwal also expressed condolences on the demise of those who lost their lives in a fire incident in the national capital's Mundka Metro Station area.

Kejriwal said, "Shocked and pained to know about this tragic incident. I am constantly in touch wid officers. Our brave firemen are trying their best to control the fire and save lives. God bless all."

As many as 20 people died after a massive fire broke out at an office building in the Mundka area in Delhi on Friday evening. According to the Delhi Police, people were still trapped in the building on Friday night. Search and rescue operations were underway.

"A total of 20 bodies were recovered from the 3-storey commercial building which had caught fire this evening near Delhi's Mundka metro station. The third floor is yet to be searched," Atul Garg, Delhi Fire Director said to ANI today.

Speaking to the media, Deputy Commissioner of Police (DCP) Outer district Sameer Sharma said, about 15 fire tenders are at the spot. The rescue operations are underway.

"Rescue operations are on. A police force has been deployed and the area has been cordoned off. About 15 fire tenders have been rushed to the spot, and more coming in. Fire is on two floors. About 50-60 people have been rescued," Sharma said.

So far 10 people are injured in the fire, said Delhi Police.

Sunil Choudhary, Deputy Chief Fire Officer, Delhi Fire Service said that some people jumped off the building and were shifted to the hospital.