In this truck, a large number of women and children were traveling. Under the Kassaua village, the truck fell in a 35 feet deep pit in which 10 male devotees died on the spot. 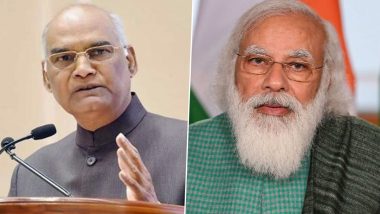 At least 10 people were killed and several sustained injuries after a truck fell into a roadside ditch. All the deceased were men, police said.

"I am deeply saddened to hear the news of the demise of people in a horrific road accident in Etawah, Uttar Pradesh. I offer my heartfelt condolences to the families of the deceased and wish for the wounded to recover quickly," the President tweeted.

In a condolence message on Twitter, the Prime Minister's Office (PMO) said, "The horrific road accident in Etawah, Uttar Pradesh is very sad. My deepest condolences to the families of those who have lost their lives in the accident. I wish the injured speedy recovery."

Union Home Minister Amit Shah has deeply mourned the death of people in the road accident. In a tweet, Shah expressed his condolences to the bereaved family, wishing peace for the departed soul. Etawah Road Accident: 10 Killed After Truck Falls into Gorge in UP's Kassaua Area, Yogi Adityanath Announces Ex-Gratia of Rs 2 Lakh.

"I am hurt by the sad news of the road accident in Etawah. The local administration is engaged in relief work. I express condolences on the irreparable loss of those who have lost their family and friends in this horrific accident and wish the injured speedy recovery," he tweeted in Hindi.

Meanwhile, Rajasthan Chief Minister said: "I am pained by the loss of lives in a tragic accident. My heartfelt condolences to the bereaved families. May they remain strong in this difficult time. Prayers for the speedy recovery of those injured."

Giving details about the accident, Senior Superintendent of Police Brijesh Kumar Singh said that a truck was coming from Pinahat of Bah tehsil to hoist a flag at Lakhna temple. In this truck, a large number of women and children were traveling. Under the Kassaua village, the truck fell in a 35 feet deep pit in which 10 male devotees died on the spot.

Further investigation is going is underway, she added. Uttar Pradesh Chief Minister Yogi Adityanath announced financial assistance of Rs 2 lakh to the dependents of the deceased in this accident.

The Chief Minister directed the officials to reach the spot immediately and conduct relief and rescue operations at a rapid pace and said that proper arrangements should be made for the treatment of those injured in the accident.