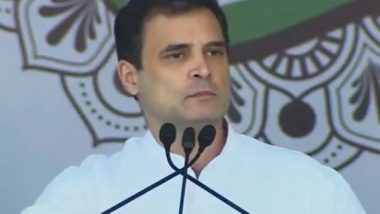 Under this scheme, the Chhattisgarh government will give annual financial aid of Rs 6000 to rural landless families. The registration for the scheme was started last year in September.

As per the Chhattisgarh government's public relations department, Chief Minister and Congress leader Bhupesh Baghel had invited Rahul Gandhi on behalf of the state government.

The event will be held at Rajyotsav Ground.

The Wayanad MP will also attend the foundation laying ceremony of a 'Sevagram' being built in Nava Raipur during his visit to the state.

The program is scheduled amid Assembly elections to five states including Goa, Uttar Pradesh, Uttarakhand, Manipur, and Punjab.

Polls to elect the 70-member Uttarakhand Legislative Assembly are scheduled to be held on February 14. Punjab will go to the polls on February 20.

Goa is scheduled to go to the Assembly polls on February 14 while Manipur will vote in two phases on February 27 and March 3.

The counting of votes will take place on March 10. (ANI)