The BJP Tuesday hit out at Congress leader Rahul Gandhi, saying his meeting with the UK opposition leader Jeremy Corbyn was an anti-national act and a plot against the country. 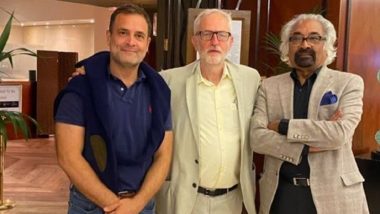 New Delhi, May 24: The BJP Tuesday hit out at Congress leader Rahul Gandhi, saying his meeting with the UK opposition leader Jeremy Corbyn was an anti-national act and a plot against the country.

Gandhi, who is on a visit to London, met Corbyn Monday and the Indian Overseas Congress shared the picture of the two along with Sam Pitroda. "The meeting between Rahul Gandhi and Jeremy Corbyn is not a coincidence but a well-planned conspiracy against our country, it's an experiment to hurt India's interest," the BJP's national spokesperson Shehzad Poonawala said in a statement issued by his party. 'Rahul Gandhi, Priyanka Gandhi Vadra Do Part-Time Politics', Says BJP MP Rajyavardhan Rathore After Wayanad MP's Nightclub Video Goes Viral.

The Congress has justified Gandhi's meeting and shared pictures of Corbyn with Prime Minister Narendra Modi to ask whether he too endorsed the "anti-India" views of the UK Labour leader and MP.

Corbyn, who served as Leader of the Labour Party and Leader of the Opposition from 2015 to 2020, has often expressed his views against India. Rahul Gandhi was "instigating and promoting anti-India forces", Poonawala claimed, adding the Congress leader's meeting with Corbyn is "an anti-national act and a plot against the country".

Corbyn has always given statements against India on the issue of Jammu and Kashmir, the BJP leader said. Gandhi has "become so blind in his hate campaign against" Prime Minister Narendra Modi that he has now "started meeting all those anti-India forces which are openly running hate campaign against our country", Poonawala said.

He further said the Congress is openly “casting aspersions" on India's constitutional institutions from global platforms, and also "demeaning" the valour and sacrifices of the country's armed forces. "The Congress party is openly criticising and demeaning India from international platforms which is highly condemnable," Poonawala said.