Rashtriya Swayamsevak Sangh (RSS) chief Mohan Bhagwat on Friday showed concern over the geo-political changes in Afghanistan and questioned the intention of Taliban, Pakistan and China while adding that our military preparedness on the borders needs to be strengthened. 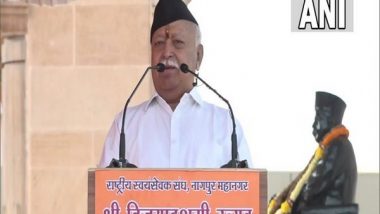 Nagpur, October 15: Rashtriya Swayamsevak Sangh (RSS) chief Mohan Bhagwat on Friday showed concern over the geo-political changes in Afghanistan and questioned the intention of Taliban, Pakistan and China while adding that our military preparedness on the borders needs to be strengthened.

In his annual Vijaya Dashami address, the RSS chief said, "We know Taliban's history. China and Pakistan support it to this day. Even if the Taliban changed, Pakistan didn't. Has China's intentions towards India changed? While dialogues should happen but we need to be aware, alert and prepared."

"Their predisposition - passionate fanaticism, tyranny and terrorism in the name of Islam - is sufficient to make everyone apprehensive of the Taliban.

But now China, Pakistan and Turkey have coalesced in an unholy coalition with the Taliban. Since Abdali, our north-western borders are once again a matter of serious concern," said RSS chief.

Bhagwat said that border security needs to be strengthened not just along the land border but also along the coastline where silent attacks take place.

He said that the illegal infiltration from across the border should be completely curbed while adding that these infiltrators should be deprived of citizenship rights by creating a national citizen magazine.

Bhagwat, who recently went to Jammu and Kashmir for the first time after the abrogation of Article 370, while praising the administration urged the government to take necessary measures to stop targeted killings in the valley.

"Terrorists in Jammu and Kashmir have restarted the spate of targeted killings of nationalists especially Hindus. This is being done to destroy their morale and to re-establish the reign of terror in the valley. The government should fast track its efforts to curb and neutralise the terrorist activities," added Bhagwat.

Bhagwat emphasised that it is India's culture to integrate varied linguistic, religious and regional traditions and to promote mutual cooperation among all while accepting and honouring all as equal with identical opportunities for growth.

"Our ideals are our common ancestors. It is the grasp of this very fact that the country saw martyrs like Hasankhan Mewati, Hakimkhan Suri, Khudabaksh and Gaus Khan and a revolutionary like Ashfaqullah Khan. They are admirable role models for all," said Bhagwat.

The Vijaya Dashami address of the RSS chief is considered the most important event for the organisation as it is during his address future plans and vision are put forth for all to follow. It is from this stage that RSS stand on many issues of national importance is known.

Dussehra or Vijaya Dashami, according to the Hindu calendar is celebrated on the 10th day after the 9 days of Navratri festivities in the month of Ashvina.