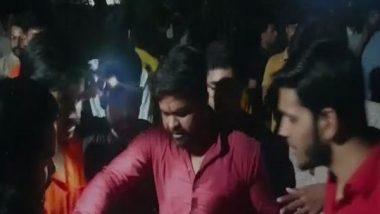 Screengrab of the protest on JNU campus (Photo/ANI)

New Delhi, April 10: On the occasion of Ram Navami, a clash broke out between students backed by Akhil Bharatiya Vidyarthi Parishad (ABVP), the National Students Union of India (NSUI) and Left-backed students on the Jawaharlal Nehru University campus in the national capital on Sunday.

The Akhil Bharatiya Vidyarthi Parishad (ABVP), the student wing of the Bharatiya Janata Party, on Sunday protested at the Jawaharlal Nehru University (JNU) campus, demanding that non-vegetarian food should not be prepared in the mess on the occasion of Ram Navami.

The ABVP also accused the National Students Union of India (NSUI) and Left-backed students of preventing them from worshipping on Ram Navami. "Left and NSUI workers created a ruckus during pooja in the university on the occasion of Ram Navami. There is no angle of non-veg. They have a problem with programs on the occasion of Ram Navami," said Rohit Kumar, ABVP's JNU wing president. JNU Violence: ABVP Attacks Students Eating Non-Veg Food in Canteen During Navratri.

A JNU student, Sarika told ANI, "I was the former vice-president of JNUSU. In the afternoon today, a message went viral on social media that ABVP members are not allowing non-veg food inside the campus. The mess usually prepares non-veg food items on weekends. However, ABVP members did not let this food to be prepared."

"Following this, a clash broke out between student unions inside the campus. Many hostel students did not get food on time as food was not prepared in adequate quantity," she said.

Another JNU student said, "A clash occurred around 4-5 pm today. ABVP alleged that their religious sentiments will be hurt if non-veg food will be served on the occasion of Ram Navami." Violence at JNU: Stopped From Eating Non-Veg Food; Two Groups of Students Clash at Jawaharlal Nehru University.

Reportedly, a number of protestors have been injured and have been shifted to the nearby hospitals. A few students are still protesting in the vicinity of the campus.

A week ago, on April 5, South Delhi Mayor Mukesh Suryan said there was "no need to open meat shops" during Navratri claiming that "most people do not consume non-vegetarian food" during this period. Notably, the JNU campus falls under the jurisdiction of the South Delhi Municipal Corporation.