The JNUSU alleged that the ABVP, which is the student wing of the Rashtriya Swayamsevak Sangh (RSS), used "muscle power and goondaism" to create a ruckus, manhandling the staff and asking them not to prepare any non-vegetarian items. 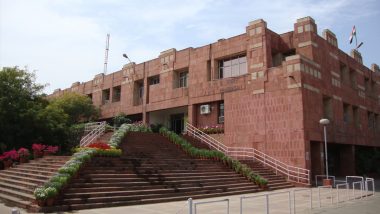 While the Jawaharlal Nehru University Students' Union (JNUSU) alleged that the Akhil Bharatiya Vidyarthi Parishad (ABVP) members stopped students from eating non-vegetarian food in the hostel and "created a violent atmosphere", the ABVP denied the charge and claimed that "'Leftists" obstructed a puja programme organised at the hostel on Ram Navami festival.

Both sides accused each other of pelting stones and injuring their members.

"There is no violence as of now. A protest was held which is over. We are all positioned here with our team. On the request of the university, we have come here. We are trying to maintain peace," he said He said the details of the incident will be shared later.

The JNUSU alleged that the ABVP, which is the student wing of the Rashtriya Swayamsevak Sangh (RSS), used "muscle power and goondaism" to create a ruckus, manhandling the staff and asking them not to prepare any non-vegetarian items.

"They were forcing and attacking the mess committee to change the dinner menu and exclude the usual non-vegetarian items in it for all students," it alleged.

"JNU and its hostels are meant to be inclusive spaces for all and not one particular section," it said. JNU Violence: ABVP Attacks Students Eating Non-Veg Food in Canteen During Navratri.

The ABVP, however, rejected the JNUSU's allegations and claimed "Leftists'' disrupted a pooja and havan organised by students on the occasion of Ram Navami.

"Some common students had organised a pooja and havan programme on the auspicious occasion of Ram Navami at 3:30 PM at Kaveri hostel.

"This pooja was joined by a large number of common students of JNU. The Leftists came to object, obstruct and prevent the pooja from happening. They have created a false ruckus on the issue of 'Right to Food' (Non-Vegetarian Food)," they said.