"For the past three generations, there has been no one in my family without a dog. My grandparents and my father were all dog lovers," Muthu said. 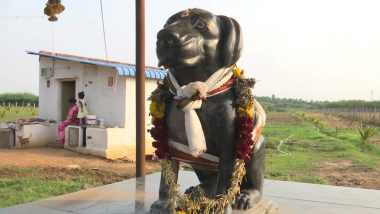 Sivaganga (Tamil Nadu), April 5: A man from Sivaganga's Manamadurai has built a temple in the memory of his late dog. Muthu, an 82-year-old retired government employee, has built the temple for his dog Tom on his farm.

Muthu said, "I had Tom since 2010 and I loved him more than my child. Unfortunately, in 2021 he died. So we are making an idol of him. For the past three generations, there has been no one in my family without a dog. My grandparents and my father were all dog lovers." Hungary Train-Truck Crash: Several Killed After Pick-Up Truck Crashes Into Train in Southern Hungary.

Manoj, Muthu's son said, "All of a sudden, Tom developed health issues and died without responding to treatment in Jan 2021 and my father decided to make a temple for him and took Rs 80,000 from his savings to get a marble statue made."

"As of now we offer garland to the statue on auspicious days and on all Fridays," added Manoj.

The temple has been attracting many people from the area.