As the nine-day long festival, Rath Yatra began in Odisha from Monday, a two-day curfew has been imposed and a total of 65 platoons of police force have been deployed across the city, informed Narasingha Bhol, IGP Northern Range. 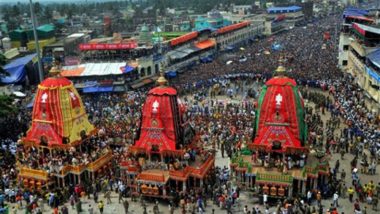 Puri, July 12: As the nine-day long festival, Rath Yatra began in Odisha from Monday, a two-day curfew has been imposed and a total of 65 platoons of police force have been deployed across the city, informed Narasingha Bhol, IGP Northern Range.

Speaking to ANI here on Sunday, Bhol said, "Ahead of Rath Yatra, curfew has been imposed from 8 pm, July 11 till 8 pm, July 13 in Puri. 65 Platoon have been deployed at different points. No devotees are permitted to attend the yatra." Rath Yatra 2021 Wishes & HD Images: WhatsApp Messages, Lord Jagannath Photos, Quotes, Facebook Wallpapers and SMS to Send Greetings on This Auspicious Day.

Earlier, Jagannath Temple Chief Administrator Krishan Kumar had on Sunday informed that all arrangements for the Rath Yatra were completed.

He had said that raths have arrived at the Singh Dwar and further preparations were underway for the yatra. Jagannath Rath Yatra 2021 Wishes: President Ram Nath Kovind Extends Greetings, Prays For Happiness, Prosperity & Good Health of Countrymen.

He had mentioned that the Archaeological Survey of India (ASI) had asked for permission for doing laser scanning of the Jagannath Temple ahead of the yatra. Jagannath Puri Rath Yatra 2021: Sand Artist Sudarsan Patnaik Creates Miniature Sand Chariot on the Auspicious Occasion of Ratha Jatra.

He had yesterday said that secret rituals of Lord Jagannath would take place at night before the deity is carried from the temple to the rath.

According to the Administrator of Puri Jagannath Temple, Ajaya Jena, the servitors testing negative for Covid-19 would be allowed to participate in the pulling of the chariots.

Krishan Kumar had asserted that everyone involved in the conduct of the yatra has been tested and only those who have tested negative for COVID-19 are being allowed to participate.

"Further, secret rituals of Lord Jagannath would take place at night and tomorrow morning lord Jagannath will come out of the temple and go to the Raths. We've tested everyone whosoever is involved in the conduct of Rath Yatra and those who're negative are being allowed to participate," said Kumar.

The annual Rath Yatra of Lord Shree Jagannath in Puri is being held this year and servitors who have received vaccine shots and have tested negative for COVID-19 will be allowed to attend rituals.

This will be the second year in a row when the devotees will not be allowed to attend the celebrations due to the second wave of the COVID-19 pandemic.

Announcing the decision Odisha Special Relief Commissioner, Pradeep K Jena on Thursday said that the Supreme Court's guidelines, which were issued last year on conducting the Rath Yatra will be followed this year too.

However, the state government has restricted the Rath Yatra to other places in the state but the rituals will be allowed to perform in the temples without any gathering.

Similar criteria have also been followed by the police personal and officials will be deployed to conduct the Rath Yatra.

The Supreme Court on July 22, 2020, modified its earlier order and allowed the annual Jagannath Rath Yatra in Odisha's Puri to be held with the coordination of the Temple committee, State and Central government without compromising with the health issue pertaining to COVID-19.