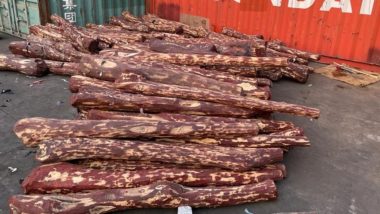 Bengaluru, August 5: Two people have been arrested here with 9.135 tonnes of red sanders worth Rs 4.5 crore, which they wanted to smuggle to foreign countries, police said on Thursday. According to police, Anand Kumar (51) and Anil Singh (47), both residents of Bengaluru, were arrested on Wednesday based on a tip-off.

A raid carried out in their warehouse at Bannerghatta in the city unearthed the red-sanders or red sandalwood. Police said the duo had been smuggling red sanders grown in Karnataka, Andhra Pradesh and Tamil Nadu. Gujarat: Married Tabla Player Stalks Ex-Girlfriend, Arrested by Police.

Along with the red sanders, police confiscated two trucks which were used for the storage and smuggling of the consignment.