Uttarakhand Chief Minister Pushkar Singh Dhami on Monday filed his nomination for the Champawat assembly by-elections scheduled to take place on May 31. 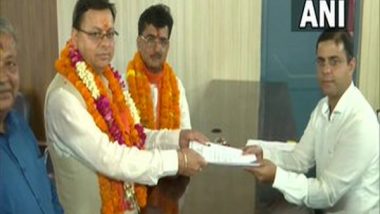 Champawat, May 9: Uttarakhand Chief Minister Pushkar Singh Dhami on Monday filed his nomination for the Champawat assembly by-elections scheduled to take place on May 31.

Bharatiya Janata Party (BJP) MLA Kailash Gehtori had resigned from the Champawat assembly seat to pave the way for Dhami to contest by-polls after Dhami lost from the Khatima constituency during the polls held in February this year. Who Is Pushkar Singh Dhami, the New Uttarakhand Chief Minister?

Despite the BJP winning the 2022 Assembly elections in Uttarakhand with a majority, Dhami lost the Khatima seat to Congress candidate Bhuwan Chandra Kapri. Presently Dhami is not a member of the state legislative assembly.

Before filing his nomination he offered prayers in Banbasa. "Grateful to Champawat for making Kailash Gehtori victorious. He had urged me to contest from here. I'm ready to serve Champawat with the blessings of all deities," he had said before filing the nomination.

He also inaugurated the Sainik Election Office and CM Camp Office in Banbasa earlier this morning. According to the Election Commission, the polling will be held on May 31 while the counting of votes will take place on June 3.