A wild sub-adult male elephant strayed into a village in West Bengal's Jalpaiguri district on Monday and destroyed tea plantation in the area. 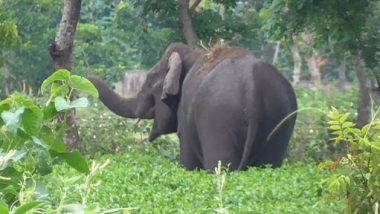 Jalpaiguri, June 15: A wild sub-adult male elephant strayed into a village in West Bengal's Jalpaiguri district on Monday and destroyed tea plantation in the area. The incident took place at Putimari village under Fulbari Panchayat, where a two and half years old elephant entered the tea garden from the nearby Bhaikunthupur forest, damaging some tea bushes and households near the tea garden.

Later, the elephant took shelter in a bamboo plantation for several hours and again entered Putimari village. It took a team of 100 forest guards, including some senior officers, to drive the elephant into the forest again without any casualties. Assam: 50-Year-Old Man Trampled to Death by Wild Elephant in Nagoan District.

West Bengal: A wild elephant strayed into Putimari village of Jalpaiguri district yesterday and entered into tea garden area. It was later sent back into the forests, with the help of a team of forest guards. pic.twitter.com/R118cSfI1i

Dilip Roy, Pradhan, Fulbari Gram Panchayat, Jalpaiguri said, "One sub-adult elephant came out from nearby Bhaikunthupur forest and strayed into our village for several hours. The forest department drove the animal into the forest". According to Jayanta Mandal, Assistant Divisional Forest Officer, Bhaikunthupur Forest Division, the forest department's team observed the animal for a whole day before managing to drive it back into the forest.

"We received information that a wild elephant entered a village. Our team reached the spot to drive away the animal. Later we started observing it for the whole day. In the evening time we successfully sent him back to the forest. No casualty was reported," he said.