World May See Peak of Petrol, Diesel Demand by 2035 but Not in India, Says Oil Ministry Official

Fuel demand in years to come will be impacted by factors such as the availability of substitute fuels, the advent of electric vehicles (EVs) and the development of renewable fuels. 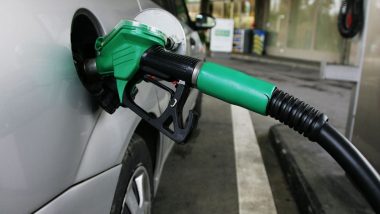 New Delhi, March 18: The world is likely to see peak demand for petrol by the late 2020s and for diesel by 2035, but auto fuels will continue to see growth in India as the economy expands, a senior petroleum ministry official said Thursday.

Speaking at the 'India Chem 2021' conference, Sunil Kumar, Joint Secretary (Refinery), Ministry of Petroleum and Natural Gas, said the country will see different energy systems co-exist through the next few decades as demand is expected to remain robust.

Fuel demand in years to come will be impacted by factors such as the availability of substitute fuels, the advent of electric vehicles (EVs) and the development of renewable fuels. Fuel Hike: Need to Think About Reducing Taxes on Petrol, Diesel, Says Government in Lok Sabha.

"Globally, demand for gasoline (petrol) is expected to peak in the late 2020s and of diesel by 2035," he said. However, in India, different energy systems, including fossil fuel, will co-exist over the next few decades.

The time till the demand peaks can be used by the country and the oil industry to prepare for future where crude oil can be converted directly into chemicals instead of the current practice of first it getting turned into fuel.

The International Energy Agency (IEA), he said, sees the biggest growth coming from petrochemical feedstock such as ethane, LPG, naphtha, and jet fuel. "It is estimated these products will account for around 90 per cent of the net increase in total oil product demand through 2040. This contrasts trends from 2000 when gasoline and diesel provided for two-third of growth in oil product." Global petrochemical is growing at nearly 4 per cent per year, he said. But, India is 40 per cent import-dependent on meeting its chemical needs.

India spent Rs 94,000 crore on the import of 35 petrochemicals alone in 2019-20. "This is when our per capita consumption is only 12 kg against the world average of 37 kg," he said, adding as the standard of living rises, the demand for chemicals and petrochemicals will continue to grow.

"And it is assumed as a thumb rule that consumption of petrochemical products grows at 1.5 times that of the growth of India's GDP," he said. "It is believed that India needs a cracker (to produce petrochemicals) every year in the foreseeable future for at least 10 years."

"Oil demand is expected to grow from 4.4 to 8.7 million barrels per day ie 435 million tonnes per annum. Part of this requirement will also come from the production of petrochemicals as newer refineries are built with higher integration with petrochemicals," he said.

The petrochemical intensity of the Indian refining industry is expected to increase from 3.5 per cent to 7 per cent by 2030 as all new refineries and expansion are planning to have 15-20 per cent of petrochemical exposure, he said.

"India dependent on imports for a variety of specialised petrochemical products. Production of such niche petrochemicals need to be encouraged through fiscal incentives," he said. "So, in order to become Aatmanirbhar in petrochemical, we need to develop large scale infrastructure for import of alternate feedstock like ethane, LNG, condensate etc to augment available of feedstock."