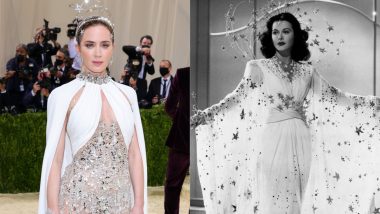 Washington, September 14: Actor Emily Blunt's appearance at Met Gala 2021 has ushered in a wave of nostalgia on social media as her look was inspired by Hedy Lamarr, the iconic actor and the star of the classic American fashion film, 'Ziegfeld Girl', which came out in 1941.

For the fashion event, she gracefully adorned a floor-length outfit with a white cape attached to the bodice. She completed the look with a star-spangled headgear, giving a nod to Lamarr. Met Gala 2021: Kristen Stewart Rocks Edgy Yet Stylish Look in Pink Chanel Jacket and White Pants.

Miranda Priestly must be so proud of Emily Blunt #MetGala2021pic.twitter.com/vtRbZIxWB9