Kylie Jenner turned many heads at Schiaparelli's couture show in Paris as she arrived wearing a huge lion head as a brooch on a black evening gown! Some of her celeb friends loved the idea and complimented her look. But many other netizens were not too happy and felt that it promotes animal cruelty and poaching, as others may think it's okay to do this with real animals. 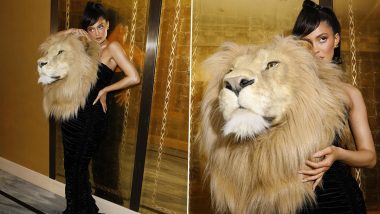 Kylie Jenner stunned people at Schiaparelli's couture show in Paris as she arrived wearing a huge lion head as a brooch on a black gown! The big lion head covered Kylie's entire torso and has been a topic of discussion across the fashion fraternity ever since she walked the hallway of the venue wearing it. According to CNN, Schiaparelli's collection was inspired by Dante's "Inferno" and the nine circles of hell, as per the show notes -- a metaphor for the doubt and creative torment that all artists face, wrote creative director Daniel Roseberry. Kylie Jenner Reveals Her Baby Boy Name on Instagram; Shares His Supercute Photos! 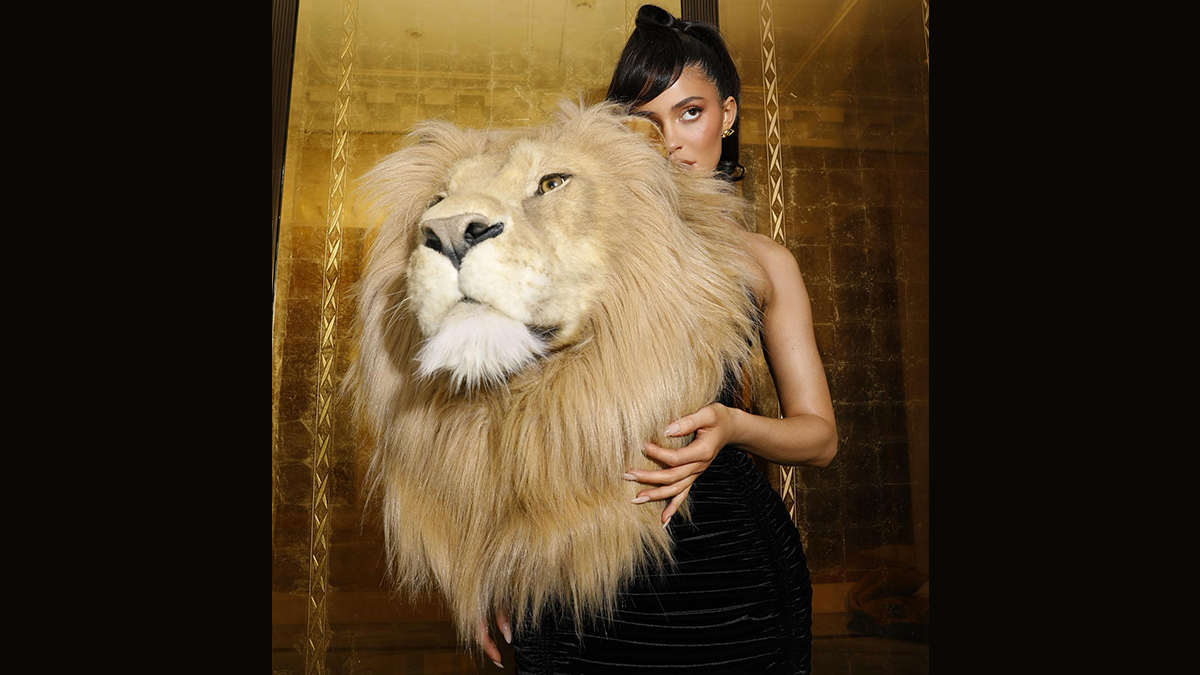 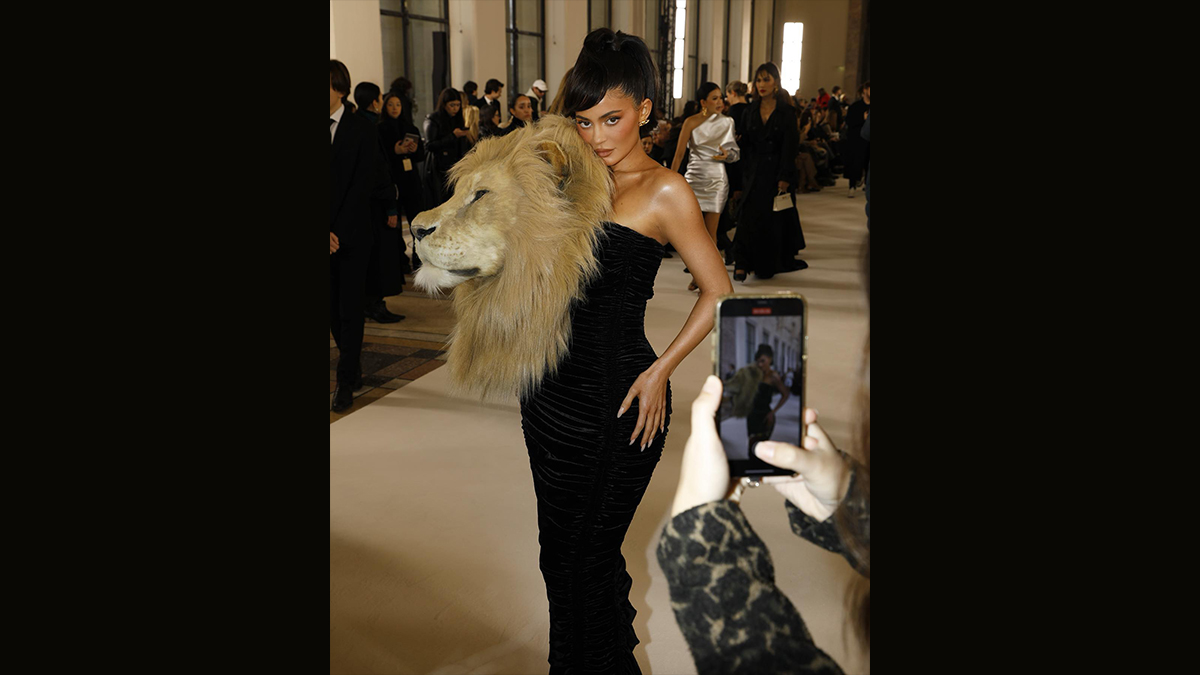 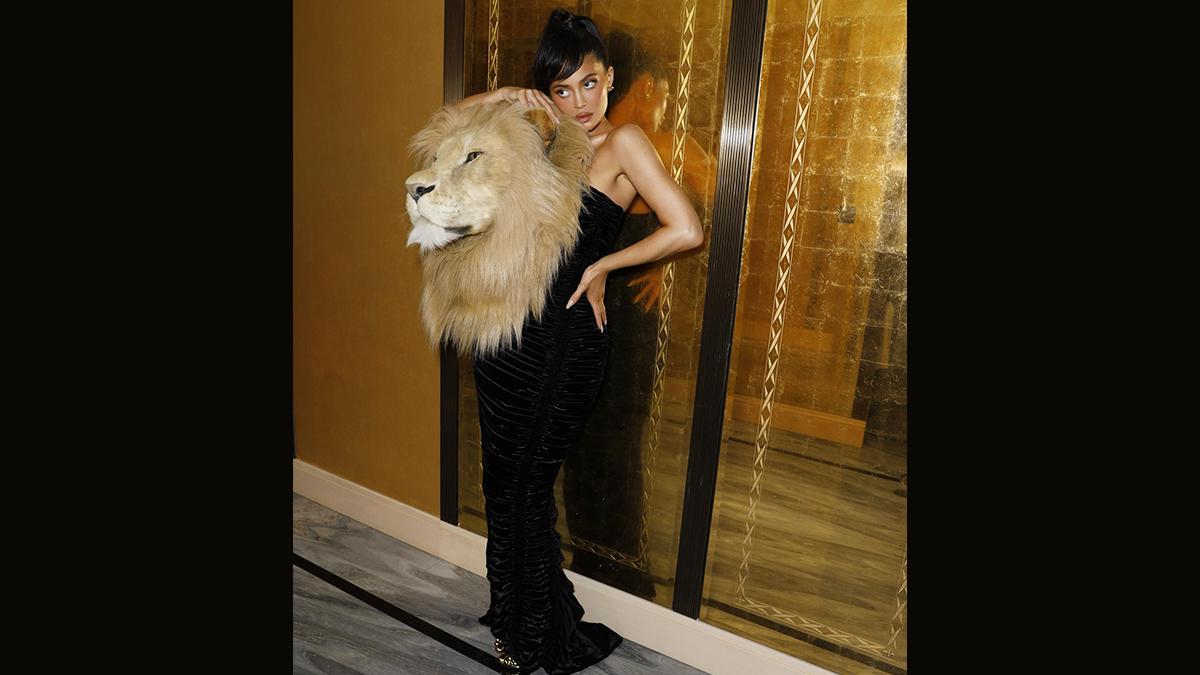 According to CNN, Roseberry reimagined the leopard, lion, and she-wolf in the collection, drawing literally from the three beasts that appear in the 14th-century poem; "representing lust, pride, and avarice respectively." Naomi Campbell wore a boxy black faux fur coat with a wolf's head peeking out from the left shoulder, and Canadian model Shalom Harlow wore a strapless snow leopard tube dress with a roaring feline head peeking out from the bust.

Coming back to Kylie's outfit, she looked fierce in the black velvet evening gown which she paired with gold shoes. For hair, she tied them back in a sleek high ponytail and for makeup, she kept it quite matte with her favourite neutral choice of the colour palette. Kylie recently announced the name of her baby boy - Aire Webster. Kylie and Travis welcomed their son on February 2 but waited until February 6 to share news of his arrival with their followers. Kylie Jenner and Travis Scott Part Ways Ahead of Their Son’s First Birthday.

The couple, who also have a 4-year-old daughter named Stormi Webster, at the time, shared a photo of the newborn's hand on Instagram along with the birthdate and a blue love emoji. A few days later, the celebrity couple revealed that they'd named their baby boy Wolf, reported E! News. However, that name had a short shelf life as in a March 21 Instagram post, Kylie shared, "FYI our son's name isn't Wolf anymore." Kylie said, "We just really didn't feel like it was him. Just wanted to share because I keep seeing Wolf everywhere."