Get latest articles and stories on Lifestyle at LatestLY. Researchers have found that regular physical activity has nearly doubled the cardiovascular benefits in individuals with depression or anxiety, compared to those without these diagnoses. 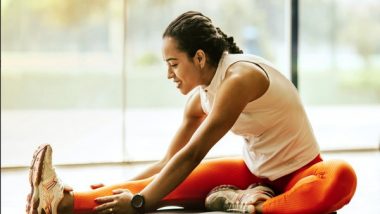 Washington [US], March 27 (ANI): Researchers have found that regular physical activity has nearly doubled the cardiovascular benefits in individuals with depression or anxiety, compared to those without these diagnoses.

The study was published in the journal 'Cardiology'.

The research findings added to mounting evidence that exercise improves cardiovascular health by helping to activate parts of the brain that counteract stress. Overall, the study found that people who achieved the recommended amount of physical activity per week were 17 per cent less likely to suffer a major adverse cardiovascular event than those who exercised less.

"The effect of physical activity on the brain's stress response may be particularly relevant in those with stress-related psychiatric conditions," said Hadil Zureigat, MD, postdoctoral clinical research fellow at Massachusetts General Hospital and the study's lead author.

"This is not to suggest that exercise is only effective in those with depression or anxiety, but we found that these patients seem to derive a greater cardiovascular benefit from physical activity," he added.

Rates of both depression and anxiety have risen during the COVID-19 pandemic, and heart disease remains the leading cause of death in the U.S. The study findings underscored the important role of exercise in maintaining heart health and reducing stress, according to the researchers.

For the study, researchers analyzed the health records of more than 50,000 patients in the Massachusetts General Brigham Biobank database. Just over 4,000 of the patients had suffered a major adverse cardiovascular event, which included experiencing a heart attack, having chest pain caused by a blocked artery or undergoing a procedure to open a blocked artery in the heart.

Researchers first assessed the rates of major coronary events among patients who reported in a questionnaire that they exercise at least 500 metabolic equivalents (MET) minutes per week--aligning with the ACC and American Heart Association primary prevention guideline recommendation of at least 150 minutes of moderate-intensity exercise per week--with those who exercise less.

MET-minutes are a unit of exercise that represents the amount of energy expended during various activities. The analysis revealed that people who got at least 500 MET minutes or more per week were 17 per cent less likely to suffer an adverse cardiovascular event.Then, they analyzed how this pattern played out among patients who had a diagnosis of depression or anxiety compared with those who did not have depression or anxiety.

This second analysis revealed that patients with depression derived more than double the benefit from exercise in terms of reduced cardiovascular risk compared with people who did not have depression. A similar benefit of exercise was found for patients with anxiety.

The research expanded upon previous studies by the research team that used brain imaging to determine how exercise improves cardiovascular health by helping to keep the brain's stress response in check. Individuals with depression or anxiety have higher stress-related neural activity and a higher risk of cardiovascular disease.

"When one thinks about physical activity decreasing cardiovascular risk, one doesn't usually think of the brain," Zureigat said.

"Our research emphasizes the importance of the stress-related neural mechanisms by which physical activity acts to reduce cardiovascular risk," he added.

Even though the study used 500 MET minutes as a cutoff for the analysis, researchers noted that previous studies show people can reduce their heart disease risk even if they do not achieve the recommended amount of physical activity. Even a little bit of regular physical activity can make a difference in terms of cardiovascular risk.

"Any amount of exercise is helpful, particularly for those with depression or anxiety," Zureigat said.

"Not only will physical activity help them feel better, but they will also potently reduce their risk of cardiovascular disease. It can be hard to make the transition, but once achieved, the physical activity allows those with these common chronic stress-related psychiatric conditions to hit two birds with one stone," he concluded. (ANI)