Luis Arce, winner of the October 18 general elections in Bolivia, took office as the new president of the South American country for the next five years. 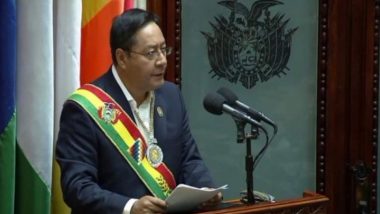 La Paz, Nov 9: Luis Arce, winner of the October 18 general elections in Bolivia, took office as the new president of the South American country for the next five years.

"I stand before you with great excitement, but also a deep sense of responsibility for the promises made during the political campaign and my commitment to fulfill each one of them," Arce, 57, said in his first speech on Sunday as head of state, Xinhua news agency reported.

"We are going to govern for everyone in peace and unity," added Arce, whose victory brought Bolivia's Movement Towards Socialism (MAS) back to power.

The solemn swearing-in ceremony began at dawn with ancestral rituals at Plaza Murillo in La Paz, where the executive and legislative branches of government are headquartered.

The ceremony then continued at the Legislative Assembly, where Arce's vice president, David Choquehuanca, was first sworn in, followed by Arce taking the oath of office as the new president of Bolivia.

Arce said he would continue the economic policies with which the MAS ruled from 2006 to 2019, to promote development from the grassroots level, and energize supply and demand to reactivate the economy.

(The above story first appeared on LatestLY on Nov 09, 2020 09:21 AM IST. For more news and updates on politics, world, sports, entertainment and lifestyle, log on to our website latestly.com).