Met Gala 2021: Timothee Chalamet Is All Set to Co-Host the Grand Fashion Event in September

According to Page Six, the 25-year-old actor has long made headlines for his fresh take on fashion, sporting red carpet looks by Gucci, Haider Ackermann, Louis Vuitton, Alexander McQueen and other top-tier designers. 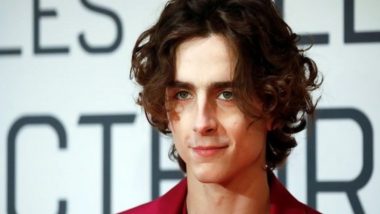 American actor Timothee Chalamet is reportedly set to co-host the Met Gala in September. According to Page Six, the 25-year-old actor has long made headlines for his fresh take on fashion, sporting red carpet looks by Gucci, Haider Ackermann, Louis Vuitton, Alexander McQueen and other top-tier designers. Sources previously told Page Six that superstar poet Amanda Gorman and CFDA Chairman Tom Ford will also host the year's most glamorous fete. Met Gala 2021 Date, Time and Important Deets: The Met Ball is Finally Happening in September! Everything You Want to Know About The Fashion Event.

The outlet also reported that Vogue's gala, also known as the 'Fashion Oscars,' would be returning in person this year with an American theme. Per Page Six, the invite-only event, with solo tickets reportedly costing USD 30,000 and tables going for USD 275,000 - has already sold out. The event is normally held the first Monday in May, but has been pushed back to back to September 13 in hopes that things will be more "normal." Met Gala 2020 Officially Cancelled Due to Coronavirus Pandemic.

A source previously told the outlet the event won't be on the first Monday of the month because that date is already occupied by Labour Day. "Even Anna Wintour can't change a federal holiday," said the insider. Page Six reported that this year's exhibit, which coincides with Vogue's ball, will open in two parts. On September 18, 2021, the first event 'In America: A Lexicon of Fashion' will be opened. Part two, 'In America: An Anthology of Fashion,' will open on May 5 of next year.

The black-tie event, which raises funds for Met's Costume Institute, is fashion's biggest night. Guests in years pasts include everyone from Lady Gaga, Katy Perry and Kim Kardashian to Jeff Bezos, Elon Musk and CAA's Bryan Lourd. Performers have included Rihanna, The Weeknd and Cher.

Due to the coronavirus pandemic, last year's event was cancelled.