While Spielberg has dabbled in a slew of genres from adventure to sci-fi, this will mark the filmmaker's first time directing a musical. 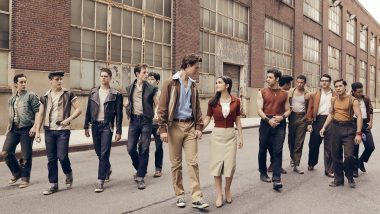 The first teaser for Steven Spielberg's much-awaited adaptation of the 1957 Broadway musical West Side Story was finally released during the 93rd Academy Awards ceremony. While Spielberg has dabbled in a slew of genres from adventure to sci-fi, this will mark the filmmaker's first time directing a musical. The Academy Award winner's version stars Ansel Elgort as Tony, newcomer Rachel Zegler as Maria, Ariana DeBose as Anita, and David Alvarez as Bernardo. West Side Story Teaser: Ansel Ergot And Rachel Zegler Are The Star-Crossed Lovers In This Calmly Chaotic Steven Spielberg Musical (Watch Video).

The one-minute and 30 seconds long teaser kicked off with various morning shots of New York City, accompanied by the all-too-familiar whistling sound. The teaser continues with members of two very separate groups meeting in the shadows, teenage gangs known as the Jets and the Sharks. Further Valentina (Rita Moreno) can be heard singing 'Somewhere' while Tony (Elgort) is seen at a high school dance, glancing at Maria (newcomer Rachel Zegler). Black Widow, Eternals, West Side Story And Other Movies That Have Postponed Their Release Dates!

The teaser also offers a glimpse at Anita (Ariana Debose) as she dances in the street with a number of other characters. It winds down with a number of quick shots including a glimpse at David Alvarez's Bernardo, as the gangs clash once again. The final shot features Tony gazing up at Maria as she stands on a fire escape and Valentina wraps up the 'Somewhere' song. Moreno, who won an Oscar for playing Anita in the 1961 film, will appear in a supporting role, playing Valentina, who is said to be a reworking of the character Doc, Tony's boss in the original stage and film versions.

In a recent interview with Variety, Moreno had assured fans that her role is "not a cameo, it's a real part." She is currently the only cast member from the 1961 film set to appear in Spielberg's remake. Moreno, who recently released the documentary 'Rita Moreno: Just a Girl Who Decided to Go for It', said she was thrilled to be working alongside Spielberg. 'West Side Story' was first a Broadway musical, which debuted in 1957. It was written by Arthur Laurents with music by Leonard Bernstein, lyrics by Stephen Sondheim, along with the concept, direction, and choreography by Jerome Robbins.

Watch West Side Story Teaser Below:

A few years later, in 1961, the musical/romance was made into a film, directed by Robbins and Robert Wise. It won 10 Oscars including best picture, best director, best cinematography, and best-supporting actress for Rita Morena who played Anita. Inspired by the classic tale of Romeo and Juliet, 'West Side Story' tells a star-crossed love story between two people from rival New York City gangs. The film's original release date was delayed because of the ongoing pandemic but is now due to hit theaters on December 10.