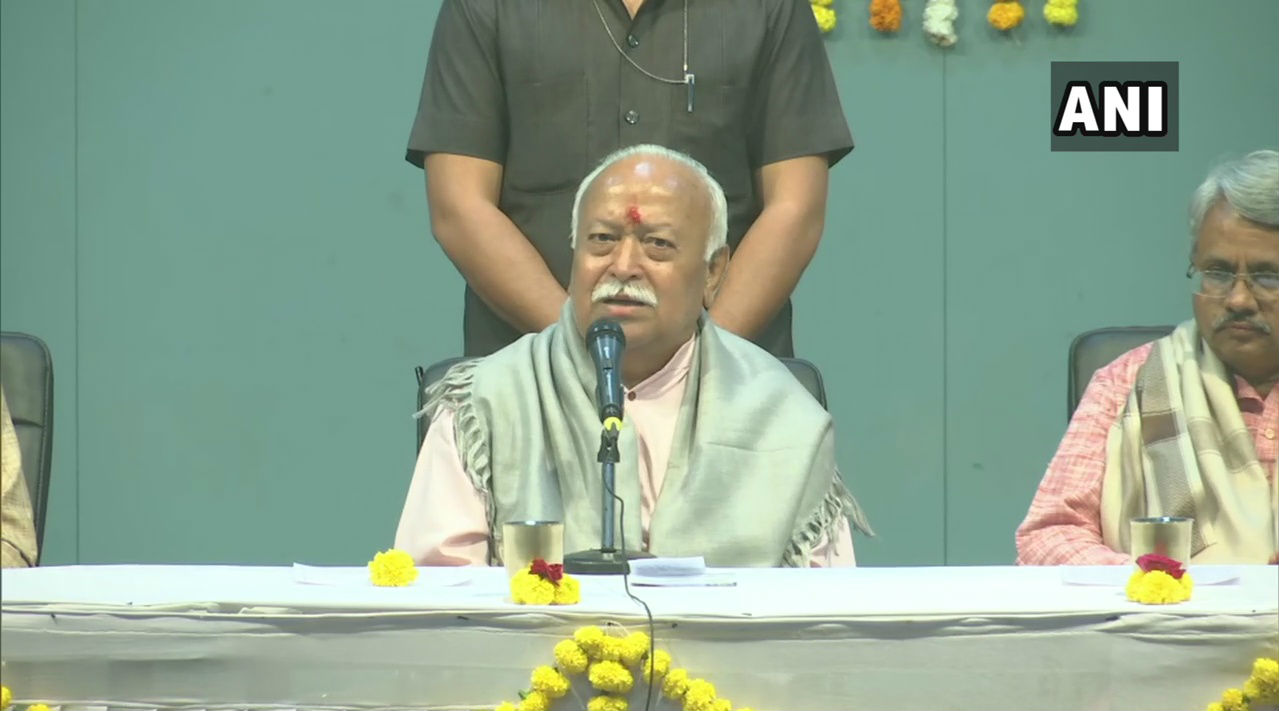 Ahmedabad, February 15: RSS chief Mohan Bhagwat on Saturday said everyone is unhappy in the society and constantly agitating notwithstanding a "manifold rise" in materialistic comforts and pleasures.

Addressing a gathering of Sangh workers and intellectuals here in Gujarat, Bhagwat also said that even political parties which are not in power are also agitating.

He was speaking on the topic "India's Role in the Present World Context".

Bhagwat further said that bigotry, violence and terrorism are on the rise in the present world.

#WATCH RSS chief: World came closer but in the process 2 World Wars took place & threat of a 3rd is looming. It's said that the 3rd one is underway in a different form. There's violence & dissatisfaction. Everyone is agitating - owners, workers, govt, public, students, teachers. pic.twitter.com/mupQi4VoEY

"India has to give 'dharma' (wisdom) to the world so that knowledge spreads but humans do not become robotic. We have always talked about the concept of global family but not global market," he said. The lecture was organised by 'Madhav Smruti Nyas', an organisation backed by the RSS.

"To think that we are living in a better world is a half truth. Facilities are not evenly distributed. Rule of Jungle is prevailing. A capable person is crushing the weak to climb up. Knowledge is used more for the destruction of the world," the Sangh chief said.

RSS chief Mohan Bhagwat, in Ahmedabad (Gujarat): The world has come closer but in the process two World Wars took place and the threat of a third one is looming. It is said that the third one is underway, in a different form. There is violence and dissatisfaction here and there. pic.twitter.com/rCG0bpu5ti

Bhagwat said people are also misusing social media by spreading "false information" to create controversies. He also stated that trying to put "everyone into one uniform" is also a form of bigotry.

"The US and Russia are super powers. China would become a super power too. Now, what super power nations did to others? They just took control of other countries for their own selfish agenda. These super powers gave it back only when they were asked to do so. Otherwise, they never gave anything to others," said Bhagwat.

He lamented that Indian youths are "not ready to accept the knowledge power of the country, and think that whatever good in India has come from other countries". He urged people to make India stronger "because the world listens only to the strong".