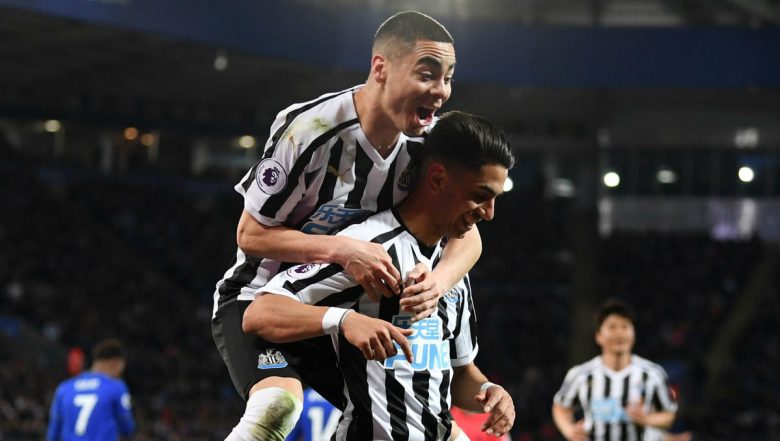 Leicester (United Kingdom), April 13: Newcastle took a huge step towards securing their Premier League survival as Ayoze Perez sealed a 1-0 win against Leicester on Friday. Rafael Benitez's side moved 10 points clear of the relegation zone thanks to Perez's first half header at the King Power Stadium.

Newcastle's first away league win since December ended a run of four games without a victory which had threatened to drag them into the relegation dogfight. Leicester City vs Newcastle United Match Summary.

They should be assured of maintaining their top-flight status after a difficult season tarnished by Benitez's discontent over a lack of backing in the transfer market from controversial owner Mike Ashley. Leicester remain seventh after a first home defeat for boss Brendan Rodgers since his move from Celtic in February.

Salomon Rondon almost gave Newcastle the lead midway through the first half with a ferocious 30-yard free-kick that cannoned back off the woodwork.

🏆 MASSIVE WIN TODAY! Happy for the team and for the fans! Your support was amazing! It seems we were playing in St. James’! Soooo happy with the goal too! 👉🏼😊👈🏼 #HowayTheLads ⚪⚫ pic.twitter.com/QebEVnYSwr

Miguel Almiron spun away from the Leicester defence and forced Leicester keeper Kasper Schmeichel into action with a powerful effort. Harvey Barnes was a constant threat for Leicester and he surged past two defenders for a shot which Dubravka was equal to. But it was Perez who broke the deadlock in the 32nd minute as the Spanish winger met Matt Ritchie's cross with a glancing header that flashed over Schmeichel.

Perez wasted a good chance to double Newcastle's lead early in the second half when he volleyed wide from Rondon's cross. Almiron fared no better after Fabian Schar carried the ball out of Newcastle's defence and picked out his team-mate with a superb pass that demanded a better finish than the hurried shot that cleared the crossbar. Leicester City Appoints Brendan Rodgers as Foxes' New Manager on Three-Year Deal.

The last time Leicester won a Premier League game in which they trailed at half was in October 2015 against West Bromwich Albion. Foxes boss Brendan Rodgers would have settled for even a draw as time ticked away, but Barnes could only head across goal from Chilwell's cross. Perez was denied by a fine save from Schmeichel in a frantic finale. Leicester striker Jamie Vardy had struggled to penetrate Newcastle's well-drilled defence and when he finally got a sight of goal he misfired, lifting his shot over from Youri Tielemans' pass.

The last opportunity for a Leicester leveller came and went in stoppage-time when Tielemans appealed in vain for a penalty after going to ground when a cross reached him at the far post.