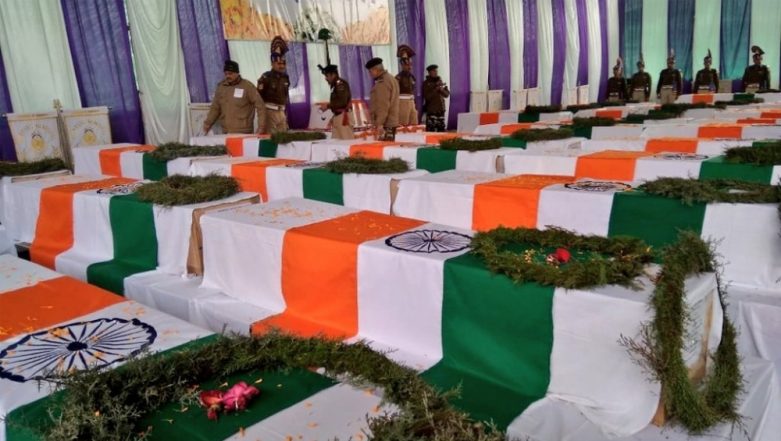 Bareilly, February 22: Among reports of several ordinary citizens across the country chipping in their bit towards relief fund for families of  CRPF soldiers slain in the Pulwama terror attack, is one heartwarming story about a school prinicipal in Uttar Pradesh's Bareilly district who sold her jewellery to contribute to the cause.

Perturbed by the plight of families of CRPF soldiers who were killed in the line of duty, Kiran Jhagwal, the principal of a private school here has donated Rs 1,38,387 that she received after selling her bangles to the Prime Minister's Relief Fund. Pulwama Aftermath: Russia, France Supports India’s Proposal at UN to Designate Jaish Chief Masood Azhar a 'Global Terrorist'.

Jhagwal said, "When I saw the wives of the soldiers weeping, I thought about what I could do for them.  I thought what's the use of my bangles? and so sold them and donated the money to the Prime Minister Relief Fund. The bangles were gifted by my father.”She also urged other people to come forward to support the brave soldiers of the country.“People must come forward. We are a population of crores and if everyone donates even Re one a lot can be collected,” she said.

In this difficult time of grief, the country has stood by its bravehearts. The ghastly terror attack on CRPF soldiers has led to the outpouring of emotions in the citizens of the country.

United in grief, people have not only led protests against the menace of terrorism but have also opened their hearts and wallets to extend a helping hand to the families of fallen soldiers.

Nearly 40 CRPF personnel were killed on February 14 after a suicide bomber rammed a car laden with explosives into a CRPF convoy in Awantipora area of Pulwama in Kashmir.