Get latest articles and stories on Science at LatestLY. A team of physicists and chemists at the University of Surrey, by using sophisticated computer modelling, has shown that errors in DNA replication can arise due to the strange rules of the quantum world. 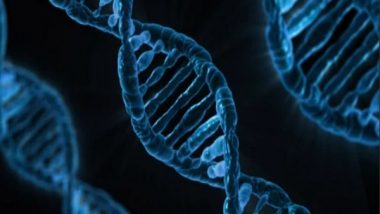 Washington [US], May 14 (ANI): A team of physicists and chemists at the University of Surrey, by using sophisticated computer modelling, has shown that errors in DNA replication can arise due to the strange rules of the quantum world.

The findings were published in the journal Nature Communications Physics.

The two strands of the famous DNA double helix are linked together by subatomic particles called protons - the nuclei of atoms of hydrogen - which provide the glue that bonds molecules called bases together. These so-called hydrogen bonds are like the rungs of a twisted ladder that makes up the double helix structure discovered in 1952 by James Watson and Francis Crick based on the work of Rosalind Franklin and Maurice Wilkins.

Normally, these DNA bases (called A, C, T and G) follow strict rules on how they bond together: A always bonds to T and C always to G. This strict pairing is determined by the molecules' shape, fitting them together like pieces in a jigsaw, but if the nature of the hydrogen bonds changes slightly, this can cause the pairing rule to break down, leading to the wrong bases being linked and hence a mutation. Although predicted by Crick and Watson, it is only now that sophisticated computational modelling has been able to quantify the process accurately.

The team, part of Surrey's research programme in the exciting new field of quantum biology, have shown that this modification in the bonds between the DNA strands is far more prevalent than has hitherto been thought. The protons can easily jump from their usual site on one side of an energy barrier to land on the other side. If this happens just before the two strands are unzipped in the first step of the copying process, then the error can pass through the replication machinery in the cell, leading to what is called a DNA mismatch and, potentially, a mutation.

The Surrey team based in the Leverhulme Quantum Biology Doctoral Training Centre used an approach called open quantum systems to determine the physical mechanisms that might cause the protons to jump across between the DNA strands. But, most intriguingly, it is thanks to a well-known yet almost magical quantum mechanism called tunnelling - akin to a phantom passing through a solid wall - that they manage to get across.

It had previously been thought that such quantum behaviour could not occur inside a living cell's warm, wet and complex environment. However, the Austrian physicist Erwin Schrodinger had suggested in his 1944 book What is Life? that quantum mechanics can play a role in living systems since they behave rather differently from inanimate matter. This latest work seems to confirm Schrodinger's theory.

In their study, the authors determine that the local cellular environment causes the protons, which behave like spread out waves, to be thermally activated and encouraged through the energy barrier. In fact, the protons are found to be continuously and very rapidly tunnelling back and forth between the two strands. Then, when the DNA is cleaved into its separate strands, some of the protons are caught on the wrong side, leading to an error.

Dr Louie Slocombe, who performed these calculations during his PhD, explains, "The protons in the DNA can tunnel along the hydrogen bonds in DNA and modify the bases which encode the genetic information. The modified bases are called "tautomers" and can survive the DNA cleavage and replication processes, causing "transcription errors" or mutations." (ANI)