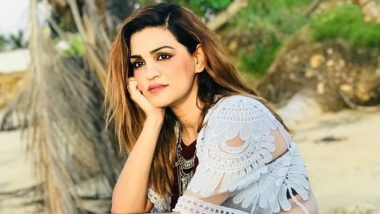 Shweta had earlier shared a newsbreak about the arrest of Showik, who is the brother of late Sushant's girlfriend Rhea Chakraborty. "Thank you God Keep guiding all of us in the direction of TRUTH! #JusticeForSushantSinghRajput #GreatStartNCB #Warriors4SRR #Flag4SSR," she wrote. Shweta on Friday applauded the Narcotics Control Bureau (NCB) for its action in the ongoing probe. The Bureau raided a number of locations including the residence of Showik Chakraborty. Sushant Singh Rajput Death Case: Showik Chakraborty, Samuel Miranda Likely to Be Produced in Mumbai Court Today.

Rhea, Showik and their parents are among those accused with abetment to the actor's suicide among other charges, in an FIR filed earlier by Sushant's family. The CBI is investigating Sushant's death along with the NCB and Enforcement Directorate (ED). After raid, the NCB on Friday night arrested Showik and the late actor's house manager Samuel Miranda.

On June 14, Sushant was found dead in his home in Mumbai. At that time, Mumbai Police had concluded it was a case of suicide.

(The above story first appeared on LatestLY on Sep 05, 2020 02:31 PM IST. For more news and updates on politics, world, sports, entertainment and lifestyle, log on to our website latestly.com).