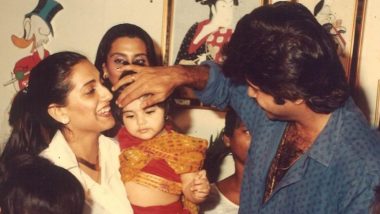 Taking a walk down the memory lane, Bollywood veteran actor Anil Kapoor on Wednesday marked his daughter Sonam Kapoor's 36th birthday by digging out her priceless childhood pictures. The 'Mr. India' star took to Instagram to share Sonam's childhood pictures from the family album. The first snap has a young Anil Kapoor holding his newborn baby Sonam in his hands. Sonam Kapoor Birthday Special: 11 Unfiltered Quotes by the Actress That Prove She’s Just the Voice We Need!

In the second picture, Sonam looks all chubby and cute. The last snap gives a glimpse of Sonam's birthday bash when she was a toddler. Addressing Sonam the Tezaab' star penned a sweet birthday note for her. "To the girl who chases her dreams and follows her heart... @sonamkapoor, watching you grow every day has been a dream come true as a parent. I surely got lucky with the best kids. You're strong when you need to be, kind without fail and always evolving. You have a way of infusing a bit of you in everything and it's one of my favourite things about you." Sonam Kapoor Birthday Special: Workout And Diet of The Stylish Bollywood Actress That Helps Her Maintain Desirable Figure (Watch Videos).

"I'm so thankful that you and Anand are safe and healthy and we can't wait to be with you again... Happy Birthday Sonam Beta! Love you and miss you!" he added. Celebrity followers and fans were quick to comment on the post, as soon as it was posted on the photo-sharing platform. Sonam replied to her dad saying, "Love you so so much daddy. Miss you more than anything else" Sonam's husband Anand Ahuja also wrote, "Perfectly said @anilskapoor - "strong when you need, kind without fail and always evolving," with red heart emoticons.

Sonam Kapoor was also showered with tons of love and birthday greetings online. Meanwhile, on the work front, Sonam will be next seen in 'Blind', the shoot for which kickstarted on December 28 in Glasgow, United Kingdom. It is a Bollywood remake of the 2011 released Korean crime-thriller of the same name, directed by Ahn Sang-hoon. The Bollywood adaptation is being directed by Shome Makhija and produced by Sujoy Ghosh, Avishek Ghosh, Manisha W, Prince Nahar, Sachin Nahar, and Hyunwoo Thomas Kim. 'Blind' is scheduled to release in 2021.