With this win, Djokovic now has 20 Grand Slams to his name and he is now equal with Swiss tennis maestro Roger Federer and Spanish player Rafael Nadal. 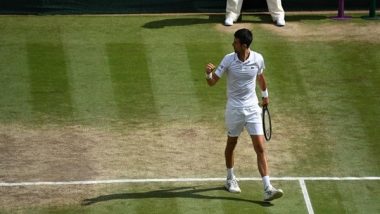 With this win, Djokovic has won three Grand Slams this year -- the Australian Open, French Open and now the Wimbledon. The top-seed would now look to end the year on a high by winning the last Grand Slam -- the US Open. Novak Djokovic Wins Wimbledon 2021 Men’s Singles Title, Equals With Roger Federer and Rafael Nadal on Most Grand Slam Victories.

The 34-year-old Djokovic made a strong comeback in the second set, winning it 6-4. As a result, the match was set to at least go to the fourth set. Carrying his momentum forward, Djokovic won the third set 6-4 and he was just one more set away from capturing his sixth Wimbledon title.