Get latest articles and stories on Sports at LatestLY. Ferrari will reveal the car that Carlos Sainz and Charles Leclerc will get the honour of driving in this season's 2022 F1 World Championship on February 17. 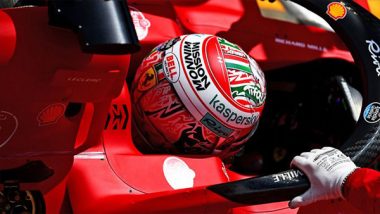 London [UK], January 17 (ANI): Ferrari will reveal the car that Carlos Sainz and Charles Leclerc will get the honour of driving in this season's 2022 F1 World Championship on February 17.

The Italian squad bounced back from their worst season in 40 years in 2020 to finish three places higher in third in the constructors' championship last term.

New recruit Sainz finished an impressive fifth in the drivers' standings, having ended the year with a podium, with Leclerc 5.5 points behind in seventh.

"Sainz and Leclerc will once again pilot the red cars this term, with Team Principal Mattia Binotto to talk to Sainz about a contract extension beyond the end of the campaign in the coming weeks. Leclerc is onboard until the end of 2024," read an official statement.

Ferrari is yet to announce the name of their new car, which will be the first under revolutionary technical rules introduced for this season.

They are the second team to reveal their launch date, with Aston Martin having got in first on Friday when they set a date of February 10 for the unveiling of the AMR22. (ANI)