The team will be led by Shikhar Dhawan with Bhuvneshwar Kumar being picked as the vice-captain. 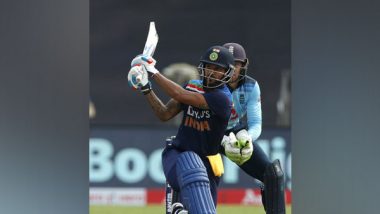 Mumbai, June 10: The All-India Senior Selection Committee on Thursday picked the squad for the 3-match ODI series and the 3-match T20I series against Sri Lanka scheduled in the month of July. The team will be led by Shikhar Dhawan with Bhuvneshwar Kumar being picked as the vice-captain.

All matches will be played at the R Premadasa International Cricket Stadium, Colombo. Prithvi Shaw has earned a call-up into the white-ball squad. Opening batters Devdutt Padikkal and Ruturaj Gaikwad have also been named in the squad. India vs New Zealand, WTC Final 2021 Date, Match Timing, Venue, Squads, Broadcast Rights and All You Need to Know.

Varun Chakravarthy, Kuldeep Yadav, Yuzvendra Chahal, Rahul Chahar, K Gowtham have been chosen as the spinners while the young speedster, Chetan Sakariya who impressed everyone in the Indian Premier League (IPL) has also earned a place in the squad.

None of India's players who are a part of the travelling group for the World Test Championship final and the England Test series will be part of the Sri Lanka series.