Get latest articles and stories on Sports at LatestLY. Mumbai Indians (MI) have signed Akash Madhwal as a replacement for star batter Suryakumar Yadav for the Indian Premier League (IPL) 2022. 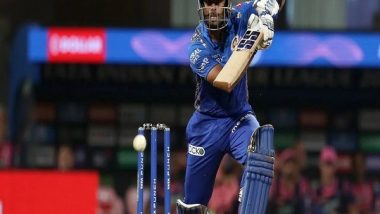 Yadav was ruled out of the 15th edition owing to a left forearm muscle injury. He sustained the injury during the team's fixture against Gujarat Titans on May 6.

Akash Madhwal is a right-arm medium fast bowler and has represented Cricket Association of Uttarakhand across all three formats of the game since making his debut in 2019.

Akash was chosen at the MI preseason camp to join the support team and has over the months demonstrated his ability with the ball, earning him the opportunity to join the season squad. (ANI)