The Polish forward has stated that he would not renew his contract at Bayern Munich. Barcelona are currently the favourites to sign the Bayern Munich striker. 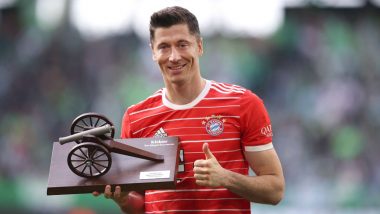 Chelsea have reportedly shown interest in signing Robert Lewandowski. The Polish striker, who is heading towards an exit from Bayern Munich at the end of his contract, has been reported to be joining Barcelona. Now Chelsea have thrown their hat in the race to sign the forward. The London club have a lot of sanctions placed on them as a result of which, they would not be able to sign new players. But that is likely to end with the completion of Todd Boehly takeover's of the club. Kylian Mbappe Transfer News: Real Madrid Reportedly Complete Deal To Sign Young French Star From PSG

However, it is not the first time that Chelsea have shown interest in signing the Bayern Munich star. They need a player like Lewandowski to lead their attack, especially with the likes of Romelu Lukaku not being consistent enough. There are high chances of Lewandowski ending up signing for Barcelona but Chelsea can prove to be a tough competitor if they table a suitable offer for the star forward.

Lewandowski still has a year left on his contract at Bayern Munich and with him not agreeing to a new deal indicates that he could become a free agent. Bayern Munich would be keen on avoiding that situation as they hope to make some profit out of the Polish striker.

(The above story first appeared on LatestLY on May 16, 2022 10:28 PM IST. For more news and updates on politics, world, sports, entertainment and lifestyle, log on to our website latestly.com).