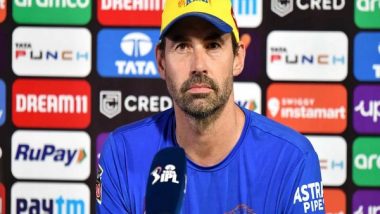 After Chennai Super Kings posted 150/6 with Moeen Ali top-scoring with 93, Rajasthan Royals chased down the total with two balls to spare thanks to efforts from Yashasvi Jaiswal (59) and Ravichandran Ashwin (40*).

Also Read | Wimbledon Championships 2022: WTA Too Decides Not To Award Ranking Points for This Year.

"I think he (Mukesh Choudhary) was excellent. He had a nervous start, but we stuck with him and we reaped the rewards towards the end. He just got better and better. Simarjeet, he got a handful of games too, is also responding to the pressure. So, those two boys definitely were a positive," said Fleming during a post-match conference.

The head coach said that there was mixed success for the side in the season and they had a number of games that were close.

"But we were not good enough to get across the line and that is the normal story of the season where you do not qualify," he added.

Fleming heaped praise on Moon Ali for his superb 93-run knock that took CSK to 150/6 in their 20 overs.

Reflecting on a disappointing season, he said, "Certainly, it did not go our way, but the reality is, When you start a new cycle and have a number of new players and a new dynamic in the team it can be testing. We suffered from catastrophic success so just trying to play the same way, continue from our last four years, which were very successful, is a real challenge. Dropping back and understanding what the new players can do, it can take a little bit of time," he said.

"We did not have a couple of form players that could get us through those early days, get the win and the momentum going. We had the opportunity to do better than we did but the reality is we could not qualify for the semis and that will be the catalyst for next year," he added.

Coming to the match, CSK batted first, posting 150/6 in their 20 overs, powered by Moeen Ali (93). Obed McCoy was the leading bowler for the RR, with 2/20. Chasing 151, Yashasvi Jaiswal scored 59 and Ravichandran Ashwin's 40* took the Royals to a crucial victory by five wickets.

With this win, RR end their league stage in the second position with 18 points. They will take on Gujarat Titans in Qualifier 1. CSK on the other hand has finished their disappointing campaign with eight points, sitting at the ninth in the points table. (ANI)