Get latest articles and stories on Sports at LatestLY. Clinical knocks by Mumbai Indians batters on Saturday helped five-time champions in finishing their IPL 2022 campaign on a high as they defeated Delhi Capitals by 5 wickets here at Wankhede Stadium. 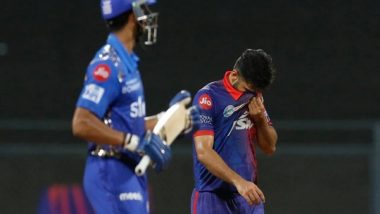 Mumbai (Maharashtra) [India], May 21 (ANI): Clinical knocks by Mumbai Indians batters on Saturday helped five-time champions in finishing their IPL 2022 campaign on a high as they defeated Delhi Capitals by 5 wickets here at Wankhede Stadium.

With this win, Royal Challengers Bangalore have qualified for the playoffs while DC have crashed out of the 15th edition of the Indian Premier League.

Coming into the game, the equation was absolutely simple for the Challengers. And they could sail through as Rohit Sharma-led side crushed the hopes of Delhi Capitals in the last league game for the two sides.

Batting first, the crucial partnership between Rovman Powell and Rishabh Pant and a quick unbeaten 19 by Axar Patel helped Delhi Capitals to post a modest total of 159/7 against MI. Rovman Powell scored 43 runs of 34 balls and provided his team with a decent total, despite initial setbacks. For Mumbai Indians, Jasprit Bumrah bagged three wickets, while Ramandeep Singh settled for two.

Chasing 160, Mumbai had a cautious start as their score read 27/1 after the powerplay. Anrich Nortje got the better of MI skipper Rohit Sharma in the 6th over while Ishan Kishan held firm for the five-time champions.

Runs were coming at a slow pace for Dewald Brevis and Ishan Kishan as MI's score read 62/1 at the halfway mark in the innings. In the 12th over, well-settled Ishan Kishan departed just two runs short of his fifty of Kuldeep Yadav. Shardul Thakur then removed Dewald Brevis for 37 in the 15th over.

With momentum shifting to DC's side, Tim David's carnage almost ended the game in favour of MI before he got out in the 18th over off 34. Anrich Nortje dismissed Tilak Varma (21) in the penultimate over but MI batters held the nerve to post winning runs.

Earlier, put to bat first, DC made a terrible start as their opening batter David Warner was caught by Jasprit Bumrah on Daniel Sams's delivery in the 2.6 over, with only 21 runs on the board. All-rounder Mitchell Marsh joined Prithvi Shaw at the crease and the duo then tried to anchor the innings for their side.

In the next over Delhi dealt with another blow as Bumrah dismissed Mitchell Marsh, who went back to the pavilion without scoring a run. This brought DC skipper Rishabh Pant to the crease. Prithvi Shaw tried hard to keep the scoreboard moving for Delhi but the opener was sent back to the pavilion by Bumrah after scoring 24 runs.

Sarfaraz Khan came to the crease but could not do much for his team as he became prey to Mayank Markande's spell and was caught by Ishan Kishan in the 9th over. Delhi Capitals were at 55-4 after ten overs in their match against MI as the Mumbai bowlers kept a check on the flow of runs through tight bowling.

Rovman Powell then came to bat and he smashed 20 runs in the 12th over, which was bowled by Hrithik Shokeen. Riley Meredith delivered a brilliant over as he had only conceded 2 runs as he restricted batters to play any short.

The duo anchored the innings and provided DC with the lost momentum. Powell and Pant took their team's total beyond the 100-run mark and also brought up their crucial 50 run partnership in under 15 overs.

Pant continued carnage as he smashed Ramandeep Singh, but the last delivery of the over ended his play as he handed a catch to Ishan Kishan, leaving DC at 125/5. Axar Patel then joined Powell, who was trashing MI bowlers all around the ground.

It was then Bumrah, who struck again and dismissed aggressive batter Powell in the 19th over and left DC's total at 143/6. Patel played an attacking game and ended DC's innings at 159/7 with a six.DC now need to defend a target of 160 runs to secure the fourth position in the points table for playoffs.