The Bianconeri had come out winners the last time these two sides faced, in the Coppa Italia semifinal. Continue reading to get live streaming and telecast details of the match. 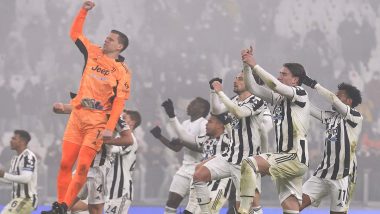 Juventus would aim to bring an end to their Serie A 2021-22 campaign on a high when they take on Fiorentina on Sunday, May 22. The match would be played at the Artemio Franchi Stadium and is scheduled to begin at 12:15 am IST (Indian Standard Time). The Bianconeri have had a poor start to their Serie A campaign this season but have bounced back really well to secure a top-four spot on the points table. This would also be the last game in Juventus colours for Giorgio Chiellini and Paulo Dybala, who would both leave the club as the season ends. Phil Foden, Manchester City Star, Named Premier League’s Young Player of the Season

Fiorentina would be securing a win in this game, which would propel them to the sixth spot. Juventus had beaten Fiorentina 1-0 in the Serie A earlier this season and would be keen on doing a league double.

The Fiorentina vs Juventus match in Serie A 2021-22 will be played at the Artemio Franchi Stadium in Florence. The game will be held on May 22, 2022 (Sunday) and the match is scheduled to begin at 12:15 am IST (Indian Standard Time).

Where to Get Live Telecast of Fiorentina vs Juventus, Serie A 2021-22 Football Match?

Fans in India can watch the Fiorentina vs Juventus match live on Viacom18 channels as they are the official broadcaster for the Serie A 2021-22 in India.

How to Get Free Live Streaming of Fiorentina vs Juventus, Serie A 2021-22 Football Match?

(The above story first appeared on LatestLY on May 21, 2022 11:06 PM IST. For more news and updates on politics, world, sports, entertainment and lifestyle, log on to our website latestly.com).