Arjun Tendulkar, son of cricket legend Sachin Tendulkar, has not been included in the Mumbai Ranji Trophy squad for the knockout matches to be held in June. 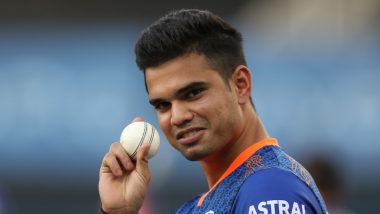 Mumbai, May 24 : Arjun Tendulkar, son of cricket legend Sachin Tendulkar, has not been included in the Mumbai Ranji Trophy squad for the knockout matches to be held in June. Prithvi Shaw will lead the squad that also includes fellow opener Yashasvi Jaiswal, Dhaval Kulkarni, and Tushar Deshpande for the match against Uttarakhand in Bengaluru. In February this year, Arjun Tendulkar and India batter Ajinkya Rahane were named in the Mumbai Ranji Trophy squad. The left-handed allrounder, who has represented Mumbai in T20 matches, is yet to make his first-class debut. Rahane is still recovering from a shoulder injury. LSG vs RCB Preview: Likely Playing XIs, Key Battles, Head to Head and Other Things You Need To Know About TATA IPL 2022 Eliminator.

Arjun Tendulkar was picked by the Mumbai Indians in the IPL mega auction for Rs 30 lakh but did not get to play a single match even after MI were eliminated from title contention early after losing eight consecutive matches. The team management's decision not to give him an IPL debut had generated much heat on social media with fans trolling Mumbai Indians skipper Rohit Sharma for their decision. Meanwhile, the Mumbai Ranji squad for the knockout matches includes two brothers -- middle-order batsman Sarfaraz Khan, who played for Delhi Capitals in the IPL, and his 18-year-old brother Musheer.

(The above story first appeared on LatestLY on May 24, 2022 11:59 AM IST. For more news and updates on politics, world, sports, entertainment and lifestyle, log on to our website latestly.com).