The two players have travelled to Kolkata and have entered the I-League club's bio-bubble. 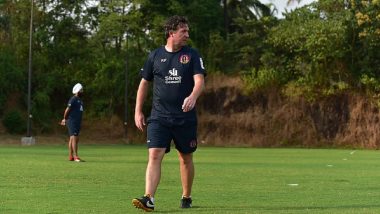 Vasco, December 25: SC East Bengal head coach Robbie Fowler feels that his side needs to stop Chennaiyin FC's 'excellent players' from scoring goals in order to outclass them in their upcoming clash of the Indian Super League (ISL) on Boxing Day.

Last season's runners-up and two-time ISL champions Chennaiyin FC, meanwhile, are fresh from their 2-1 win over FC Goa in their previous game and currently stand eighth on the points table with eight points from six games.

Midfielder Rafael Crivellaro, who was their standout performer last season, produced a match-winning effort with one goal and one assist against FC Goa after failing to emulate his past success in the first four matches. Lionel Messi 644 Goals Celebrated by Budweiser in Style, Sends Special-Edition Beers to All 160 Goalkeepers Barcelona Star Scored Against to Break Pele's Record! Kepa Arrizabalaga, Gianluigi Buffon React.

Young Indian players like goalkeeper Vishal Kaith, midfielders Lallianzuala Chhangte, Anirudh Thapa and Rahim Ali, and defenders Jerry Lalrinzuala and Deepak Tangri have shown a lot of promise for the Marina Machans while their Slovakian forward Jakub Sylvestr has had a capricious season so far with just a solitary goal from six matches.

"Their manager (Csaba Laszlo) is someone whom I've looked up to. He's got a solid team with great players at his disposal. Our job will be to stop their excellent players, which is going to be difficult. They've been a very consistent team over the years, but we'll go out there believing that we can win," the 45-year-old said in the pre-match press conference.

Having lost four and drawn one of their first five games, the Red and Golds were almost on the brink of their maiden ISL victory in their last outing against Kerala Blasters FC at the GMC Stadium, Bambolim as they led by a goal till two minutes before the final whistle.

However, a stoppage-time equaliser by Jeakson Singh meant that the game ended 1-1 and SCEB went back with just one point. They are currently placed at the bottom of the points table with two points from six games.

The Red and Golds have already agreed terms with fellow Kolkata club Mohammedan Sporting over the transfer of defender Gurtej Singh and goalkeeper Rafique Ali Sardar. The two players have travelled to Kolkata and have entered the I-League club's bio-bubble. Cristiano Ronaldo Celebrates Christmas 2020 With Girlfriend Georgina Rodriguez and Children, Wishes Fans on the Occasion (View Post).

"Obviously, we are bringing names into squad and we are always looking. If there is any player available and we feel they will benefit us of course, we are going to be interested. We are trying to bring one or two in. We will be trying someone in as for the lads who have gone out we have had opportunity to look at them over a five-six weeks period and we felt that we are not going to play them as much," Fowler said.

Fowler also had a message for the SC East Bengal fans on the occasion of Christmas. "It's a wonderful day. From me, my team, and my entire family, I wish you all a Merry Christmas!" he signed-off.