Get latest articles and stories on Sports at LatestLY. The 22-year-old midfielder, who checks in from Monaco, has been capped by the senior France team, with whom he lifted the 2021 Nations League crown after being part of the starting line-up in the final. 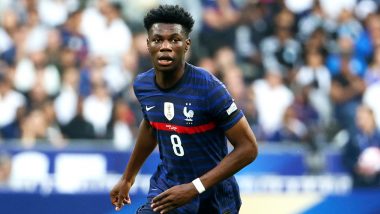 Madrid [Spain], June 11: Real Madrid CF and AS Monaco have reached an agreement over the transfer of Aurelien Tchouameni, who joins the La Liga club on a six-year deal. Tchouameni will be unveiled on Tuesday at Real Madrid City at 12:00 (CET) following his medical. The 22-year-old midfielder, who checks in from Monaco, has been capped by the senior France team, with whom he lifted the 2021 Nations League crown after being part of the starting line-up in the final. Zinedine Zidane Reportedly Set To Replace Mauricio Pochettino As New PSG Head Coach Next Season

This signing represents the capture of one of the most talented players in Europe, in both the present and the future. He was a regular fixture for Monaco and last term clocked up 50 appearances, which yielded five goals.

Despite his age, he has received several awards in his homeland. France's Union of Professional Footballers (UNFP) included Tchouameni the Team of the Season in each of the last two campaigns, whilst he was crowned as the Young Player of the Season in the 2020/21 campaign.

Before making the move to Monaco in January 2020, Tchouameni came up through the ranks at Girondins after having joined the club at the age of 11. He was part of the squad that won the U-19 domestic league title in the 2016/17 campaign, before breaking into the first team in July 2018 at the tender age of 18. During the course of those seasons, he represented several France youth national teams, before being capped by the senior side in September 2021.

Honours: 1 UEFA Nations League. Career: Girondins (2011-2020), Monaco (2020-2022). The 22-year-old's ability to control games from his position as a defensive midfielder has helped him set a steady tempo for his team in big and small games.

He continues to perform well whenever given the opportunity by Les Bleus, and is all but assured of a place in the defending champions' squad for the 2022 World Cup. (ANI)