Maana Patel has become the first Indian female swimmer to qualify for the upcoming Tokyo Olympics through universality quota, confirmed Sports Authority of India(SAI) on Friday. 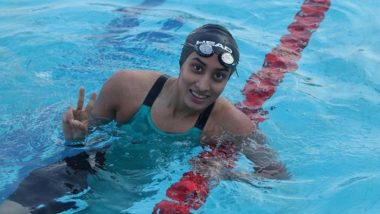 New Delhi [India], July 2 (ANI): Maana Patel has become the first Indian female swimmer to qualify for the upcoming Tokyo Olympics through universality quota, confirmed Sports Authority of India(SAI) on Friday. Maana is the third Indian swimmer who will take part in Tokyo 2020 as earlier Srihari Nataraj and Sajan Prakash have earned the automatic qualification (A time) for the Olympics. Indian Athletes At Tokyo Olympics 2020: List of Indian Contingent for the Summer Games.

Last week, Sajan Prakash became the first Indian swimmer to qualify for the upcoming Olympics as he clocked 1:56:38 in men's 200m butterfly at the Sette Colli Trophy. The qualification cut-off was 1:56:48. Later on Wednesday, Srihari Nataraj became the second Indian swimmer to qualify for the showpiece event after his 53.77 seconds effort in the 100m Backstroke event in a time trial at the Settecolli Swim Meet in Rome was ratified.

The Olympic qualification time (A time) for the 100m Backstroke event was set at 53.85 seconds. In June, the Swimming Federation of India (SFI) had announced Maana Patel as one of their nominations for the Universality Places for the Olympic Games Tokyo 2020. The nominations were communicated to FINA on June 20 through the Indian Olympic Association (IOA).

Any swimmer achieving the B time in a similar fashion may receive an invitation by FINA to participate depending on the remaining quota places to be decided after accounting for all A quota, relay only, and Universality Places.

The FINA qualification pathway provides for "Universality Place" for one man & one woman, provided no swimmer from the country has achieved an A qualification time in that gender.