As a result of dismissing Moseley, Mehidy became only the fourth Bangladesh bowler to 100 Test wickets. 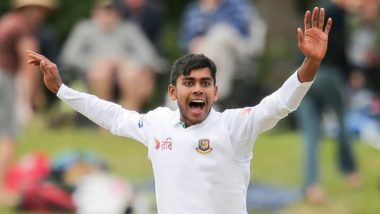 Dhaka, February 13: Mehidy Hasan Miraz on Saturday not only became the fourth Bangladesh bowler to take 100 wickets in the longest format of the game but also the fastest to achieve the glorious milestone. The 23-year-old bowler achieved the feat in the ongoing second Test against West Indies. All-rounder Shakib Al Hasan had reached the milestone in 28 Tests while Mohammad Rafique took 33 games to achieve the feat.

Mehidy achieved the glorious feat in only his 24th match and became the quickest Bangladesh bowler to take 100 wickets in the longest format of the game. He is now the third joint-highest wicket-taker in the Test cricket for Bangladesh.

At stumps on day three, West Indies' score reads 41/3 and the visitors have extended their lead to 154 runs. Nkrumah Bonner and Jomel Warrican are currently unbeaten on 8 and 2 respectively.

After bundling out Bangladesh for 296 in the first innings, West Indies' hopes of getting off to a good start were dashed as Kraigg Brathwaite (6) and Sheyne Moseley (7) were dismissed by Nayeem Hasan and Mehidy Hasan respectively, and the side was reduced to 20/2. As a result of dismissing Moseley, Mehidy became only the fourth Bangladesh bowler to 100 Test wickets.

John Campbell (18) also failed to stay at the crease for a long time and he was clean bowled by Taijul Islam. In the end, Nkrumah Bonner and Jomel Warrican ensured that the visitors did not lose more wickets before the close of play on day three.