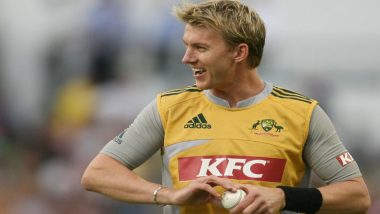 New Delhi, September 16: It was on September 16, 2007, when former Australian pacer Brett Lee became the first player to take a hat-trick in T20I cricket. He achieved the feat against Bangladesh in the inaugural T20 World Cup. The match between Australia and Bangladesh was played at Newlands, Cape Town.

In the match between Bangladesh and Australia, the former batted first and managed to score just 123/8 in the allotted twenty overs. Lee took the hat-trick in the 17th over of the innings as he dismissed Shakib-Al-Hasan, Mashrafe Mortaza, and Alok Kapali.

Brett Lee The Australian pacer returned with the figures of 3-27 from his four overs.

Australia then chased down the total with nine wickets in hand and 37 balls to spare.

Matthew Hayden and Ricky Ponting remained unbeaten on 73 and 6 respectively.

To date, there have been 13 hat-tricks taken in the history of T20I cricket.

The latest was taken by Ashton Agar of Australia against South Africa in February this year.

Sri Lanka's Lasith Malinga has taken two hat-tricks in T20I cricket. He has achieved the feat against Bangladesh and New Zealand.

Deepak Chahar is the only Indian to have taken a hat-trick in the shortest format of the game as he achieved the feat against Bangladesh last year.