England vs Pakistan 2020 Full Schedule Announced by ECB, Series to Start on August 5; Hosts to Take on Ireland in ODIs As Well

All the T20s will be played at Southampton. England's duel against Pakistan will be preceded by three ODIs against Ireland on July 30, August 1, and 4 respectively in Southampton. 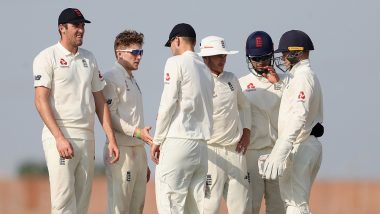 London, Jul 6: Pakistan's tour of England will begin with a three-match Test series at the Old Trafford in Manchester starting August 5, the ECB announced on Monday. While the first Test between England and Pakistan will be played from August 5 to 9 behind closed doors amidst the COVID-19 pandemic, the remaining two five-day matches will be hosted by the Aeges Bowl, Southampton from August 13 to 17 and August 21 to 25 respectively. England vs Pakistan 2020: People Will Expect More From Babar Azam Because of ODI Captaincy, Says Abid Ali.

The Test rubber will be followed by a three-match T20 series between the two sides starting August 28. All the T20s will be played at Southampton. England's duel against Pakistan will be preceded by three ODIs against Ireland on July 30, August 1, and 4 respectively in Southampton. England vs Pakistan 2020: Visitors Play Indoor Games to Stay Active While in Quarantine.

The England and Wales Cricket Board (ECB) further informed that it continues to hold talks with Cricket Australia to reschedule their limited-overs series at some stage during the summer, while the tri-series between England Women, India and South Africa will also be rescheduled.

Pakistan, who arrived in the UK on June 28, have started their preparation for two series. They are undergoing a 14-day isolation period at Blackfinch New Road, Worcester before transferring to Derbyshire's The Incora County Ground on July 13 to accelerate their preparation ahead of the first Test, which will include two four-day internal warm-up matches.

"Confirmation of these matches against Ireland and Pakistan is another important step for our game as we begin to safely stage international cricket again, but also to minimise the impact the Covid-19 pandemic has had and will continue to have, on cricket at all levels," ECB CEO Tom Harrison said in a statement.

"It has taken significant effort and expertise to allow us to reach a position where cricket is now ready and able to return to the field of play from the elite level to recreational cricket."

The three-Test series involving the West Indies begins on July 8, marking the return of international cricket after a four-month hiatus caused by COVID-19 pandemic.

Harrison said the resumption of international cricket will not only be a reprieve for fans but cricket boards as well as they suffering financially because of complete shut down since March due to the pandemic. "It must be reiterated that there is still much work for the ECB and the cricket network to do as we try to plot a path through this pandemic," Harrison added.