England vs Pakistan 2020: Visitors Play Indoor Games to Stay Active While in Quarantine 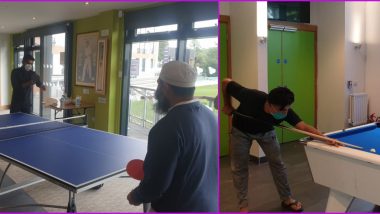 Pakistan cricket team players and coaching staff arrived in England for their series against the home side next month. The 20-member squad along with support staff reached the Manchester on Sunday. The visitors will spend 14-days in quarantine before resuming cricket-related activities. On day one of the quarantine, Pakistan players along with members of caching staff played indoor games like table tennis, snooker and darts to stay active. Babar Azam, Azhar Ali and Other Members of Pakistan Cricket Team Arrive in Manchester for Bilateral Series Against England (Watch Video).

Pakistan Cricket Board (PCB) took to Twitter and posted the pictures of players playing indoor games. “Our players and coaching staff are keeping themselves active in Worcestershire,” wrote PCB. The players will undergo mandatory COVID-19 tests in England before being cleared to resume training outdoors. Six Pakistan Players Including Mohammad Hafeez and Wahab Riaz Return Negative for COVID-19 in Second Tests Conducted by PCB.

Our players and coaching staff are keeping themselves active in Worcestershire 🎱🎯🏓 pic.twitter.com/LPTeHpwXaP

Earlier, before arriving in England, PCB conducted COVID-19 tests of players in which ten players were found positive. In the second round of tests, six out of ten players returned negative. The remaining players, who returned negative, did not travel to England and will undergo further tests. PCB then made changes to the squad for England tour and dropped players who tested positive once. The players will be added back to squad once they recover.

(The above story first appeared on LatestLY on Jun 29, 2020 07:21 PM IST. For more news and updates on politics, world, sports, entertainment and lifestyle, log on to our website latestly.com).