Azam was named Pakistan's T20 skipper while Azhar Ali was appointed as Test captain after Sarfaraz Ahmed was sacked in October last year. Azam was then appointed as the ODI skipper last month. 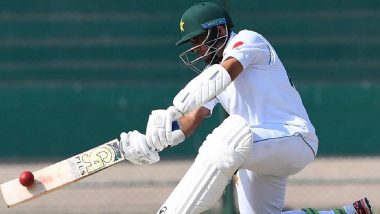 Worcestershire, July 1: Pakistan opener Abid Ali has heaped praise on white-ball skipper Babar Azam and stated that his calming persona helped him during his initial days in the national team. He also said people will now expect more from Azam considering he is now the skipper in two formats.

Azam was named Pakistan's T20 skipper while Azhar Ali was appointed as Test captain after Sarfaraz Ahmed was sacked in October last year. Azam was then appointed as the ODI skipper last month. England vs Pakistan 2020: Visitors Play Indoor Games to Stay Active While in Quarantine.

Ali recalled his first match in the longest format where he smashed a magnificent century against Sri Lanka to become the first cricketer to score tons on his Test and ODI debuts.

"I am proud to play alongside Babar Azam. My best wishes are with him. People are expecting more from him now, since he is the captain in two formats. I hope he continues to perform for Pakistan," Ali was quoted as saying by Cricket Pakistan.

"When I was batting with him on my debut, I was under pressure but he backed me and advised me to not worry and take my time at the crease.

"When I finally reached my hundred, he hugged me with all his heart. It is a pleasure to watch him bat from the other end," he added.

He also expressed his disappointment at the prospect of not being able to play at the iconic Lord's Cricket Ground in London during their upcoming tour of the England.

The tour was originally slated to begin from July 30 but due to the implications put forward by coronavirus pandemic, the series -- which includes three Tests and as many T20Is -- will now be played in August and September

The much-anticipated clash will be preceded by England and West Indies locking horns in a three-Test series, starting July 8, and it will mark the resumption of cricket after it was halted in March due to the COVID-19 crisis.

Thr first England-West Indies series will be played at the Ageas Bowl and the final two matches will be played at Old Trafford. Whilst the venues for England-Pakistan series remain undecided yet, Ali stated he would have liked to play at Lord's. Babar Azam, Azhar Ali and Other Members of Pakistan Cricket Team Arrive in Manchester for Bilateral Series Against England (Watch Video).

"It was my wish to play at the Lord's cricket ground, as it is one of the best venues in the world. Every cricketer looks forward to play there," Ali said.

"I am disappointed that there won't be any match at Lord's on this tour, but we have to abide by the safety measures. I am prepared to play at any venue and will adjust accordingly," he added.

(The above story first appeared on LatestLY on Jul 01, 2020 03:54 PM IST. For more news and updates on politics, world, sports, entertainment and lifestyle, log on to our website latestly.com).