According to a report in ESPNcricinfo, all cricketers were denied from boarding the flights because they didn't have the required clearances. 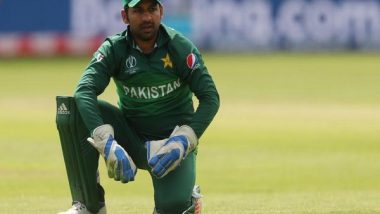 Lahore, May 30: Quetta Gladiators skipper Sarfaraz Ahmed and ten more players were not allowed to board commercial flights for Abu Dhabi via Doha on Sunday for Pakistan Super League (PSL) season six. According to a report in ESPNcricinfo, all cricketers were denied from boarding the flights because they didn't have the required clearances.

"Five persons from this PSL contingent were cleared to fly, while the others had to return to their hotels where they have been in quarantine since May 24," read the report in ESPNcricinfo. PSL 2021 Postponed Indefinitely After Seven Players Test COVID-19 Positive.

A group of more than 25 people from Lahore and Karachi was supposed to travel to the UAE on a chartered plane. According to the report, the Pakistan Cricket Board (PCB) opted to put players in commercial flights nullifying the COVID-19 protocols in a last-minute decision.

Earlier this week, Quetta Gladiators pacer Naseem Shah and Multan Sultans star all-rounder Shahid Afridi were ruled out of the Abu Dhabi leg of PSL. Naseem breached the protocols for departure from Pakistan by arriving at the designated hotel with a non-compliant RT-PCR test result.

However, PCB made a U-turn and decided to allow Naseem to join his team for the PSL. PSL six was postponed after a string of COVID-19 cases were reported in March this year. The tournament is set to resume in June in Abu Dhabi.