Get latest articles and stories on Sports at LatestLY. Romelu Lukaku on Friday rubbished the statements from his agent in which the latter claimed that the striker wants to hold talks with Chelsea this summer over his future at the Premier League club. 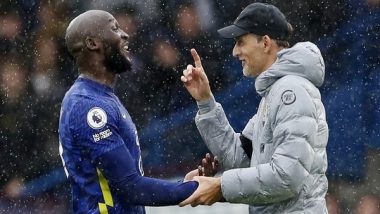 London [UK], May 14 (ANI): Romelu Lukaku on Friday rubbished the statements from his agent in which the latter claimed that the striker wants to hold talks with Chelsea this summer over his future at the Premier League club.

The 29-year-old has struggled this season as he has scored just 15 goals in 42 games across all competitions for the Blues.

The striker's agent Federico Pastorello in an interview with La Repubblica admitted his client had encountered "problems" at Stamford Bridge.

He said, as per goal.com: "Given the figures of the transfer, no one could have expected such a situation. I'm not the one to discuss technical choices, but it is obvious that there was a problem."

"However, figures must be put into context. He is the best scorer in the team despite getting less playing time than his team-mates," the agent added.

After this interview by Pastorello, Lukaku took to Instagram and said: "Never ever will I let someone speak for me."

"I kept my mouth shut and focused on helping the team and end the season in the best way possible. So if someone out there trying to say something about me and the club... not in my name," he added.

Chelsea will be back at Wembley to face Liverpool in a cup final for the second time in the space of a few months, this time with the FA Cup up for grabs on Saturday. (ANI)