England and India will lock horns in a one-off Test match, three ODIs, and three T20Is. 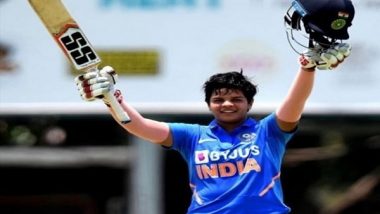 Mumbai, May 14: Teen sensation Shafali Verma was included in the Test squad as the Board of Control for Cricket in India (BCCI) on Friday announced the Indian women's teams for the Test, ODI and T20I series against England in June. England and India will lock horns in a one-off Test match, three ODIs, and three T20Is.

While Shafali's selection does show that the selectors believe she can be a game-changer even in the four-day Test, Shikha Pandey and Taniya Bhatia have also returned.

The two teams will first square off in a four-day Test match, beginning June 16. Then both teams will lock horns in three ODIs beginning June 27 with the matches slated to be played at Bristol, Taunton, and Worcester.

Both teams will then square off in three T20Is, beginning July 9 and the three matches will be played at Northampton, Hove, and Chelmsford.

"The All-India Senior Women's Selection Committee on Friday announced the Indian squad for the one-off Test match, ODI & T20 series against England," the BCCI said in an official statement.