He had performed well in six matches in the recent Pakistan Super League. 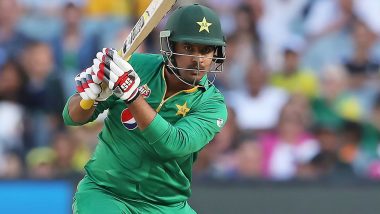 Karachi, March 23: Pakistan opener Sharjeel Khan on Tuesday dismissed concerns over his fitness level ahead of the tour of South Africa and Zimbabwe, saying that his recent good form would not have been possible if he was unfit.

Sharjeel's selection in the Pakistan T20 squad for the four games in South Africa and another three in Zimbabwe has been questioned by some former players and critics who believe his fitness is not up to the level required to play international cricket. He had performed well in six matches in the recent Pakistan Super League.

“I have been playing top level cricket for the last six to seven months in domestic season. I have played around eight first class matches and other list A and T20 matches domestically and in Pakistan Super League,” Sharjeel said during a media interaction. Pakistan Tour of South Africa 2021: One Pakistan Player Tests Positive for COVID-19, to Undergo Another Test on March 18.

"I am confident by the time the matches come up in South Africa my fitness will be better. But I don't I am unfit. I am fit. That is how I have played constantly in the last seven months. I don't think my fitness is an issue.”

The hard-hitting batsman also dismissed reports that he had been given specific tasks and deadline to achieve a benchmark fitness level to be in the Pakistan team eleven.

“Their is nothing negative and I am doing my individual training. No has given me any deadlines. I myself want to improve my fitness and am working with the team trainer, Yasir,” he said.

“I am also paying a lot of attention to my skills and I batted for two years yesterday. Skill and fitness work together.” Sharjeel said he was looking forward at the coming tour as a challenge.

“I know pitches will be different in South Africa but I always try to play the ball on merit and stick to my natural game,” said Sharjeel who will be touring South Africa for the first time.

Asked how difficult it was for him to make a comeback after serving ban for two and a half year for spot-fixing, Sharjeel said everyone had a past and he didn't try to think too much about it now.

“I have a past but after my comeback I am just trying to focus on cricket, enjoy it, give performances, play my natural game and help win matches for the team."